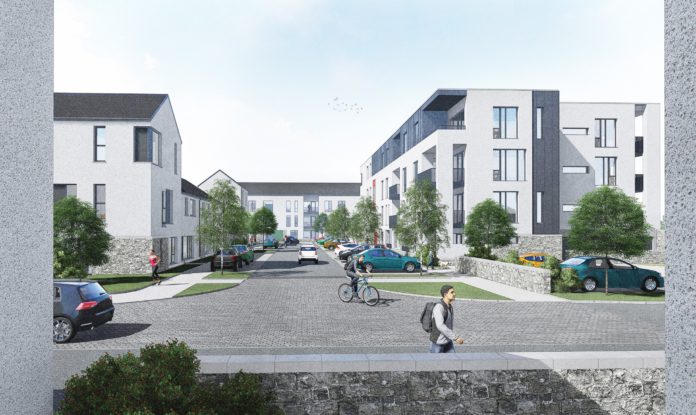 An Bord Pleanála has approved plans for the construction of 111 houses and apartments in Claregalway.

A minimum of 20% of the homes which are to be built at Lakeview, Claregalway must be reserved for Irish speakers for at least 15 years.

In total, An Bord Pleanála attached 24 conditions of planning permission for the residential development.

Among those, a minimum of 10% of communal parking spaces must have charging points for electric vehicles.

All other parking spaces must have the infrastructure ducting installed so that they are able to be fitted with EV charging points.

The housing development is being undertaken by K King Construction, which sought planning permission for a Strategic Housing Development directly from An Bord Pleanála.

The roughly 5ha site is located next to the Cuirt na hAbhann estate and Claregalway Community Centre to the west.

Access to the site will be via Lakeview Road, where the developer said that upgrade works will take place including building a new footpath, with pedestrian access intended to Cúirt na hAbhann also.

Realignment works will also be carried out at the junction of Lakeview Road and Lydican Road for safer egress.

The houses would be a mix of terraced, semi-detached, and detached units ranging from two to four bedrooms.

The apartments will be split between two blocks, which will be three and four storeys in height respectively, totaling 14 one-bedroom units and 24 two-bedroom units.

A total of 11 units, consisting of 10 apartments and one house, will be transferred to the council for social or affordable housing, as is required under planning law.

The estate will be served by a total of 191 parking spaces, 10 of which will be designated for the estate’s creche, and the other 181 for residential use.

There were a number of objections made to An Bord Pleanála about this development, with locals concerned about road safety, land zoning, the density of the estate, and land consent.

Locals expressed concern that the increased traffic generated by the estate will pose a safety hazard to the multiple schools nearby, and also result in congestion.

Objectors also argued that the density of 34 units per hectare is far in excess of the 5-15 units per ha, which it is argued is the correct designation of the area.

The submission from Galway County Council also said that the density of the plans is greater than what is appropriate for the site.

The planning inspector for An Bord Pleanála ultimately said that Claregalway is within the Galway Metropolitan Area, and that the housing density was appropriate.

Third party submissions also raised concerns about legal consent issues for land that will be affected by the development, but the inspector’s report noted that legal issues are not something for the board to arbitrate when considering planning permission.