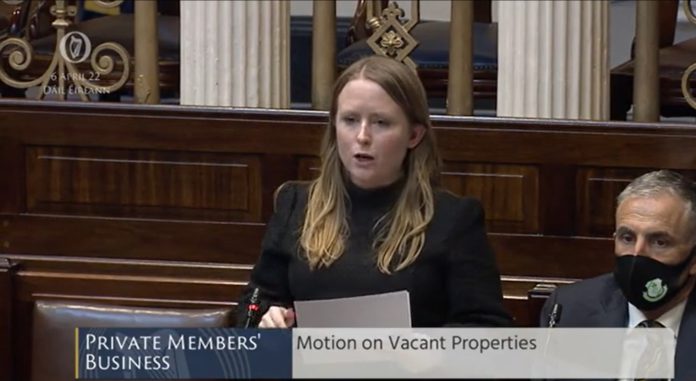 The lack of clear figures on just how many vacant properties there are in Galway and around the country is a hindrance in the housing crisis, a Galway TD has said.

Mairéad Farrell said that the state needs to get to grips with vacant and derelict properties, and create a proper register of them.

Speaking in the Dáil, she said that while the Irish Times reports that there are 45,000 vacant or

“Why, after more than a decade of a housing crisis, can we not say with certainty what the figure for vacant properties across this State actually is?”

“Why do we not have a property register for vacant and derelict properties? It is absolutely remarkable,” Mairéad Farrell said.

“I often raise this with the local authorities in my area when trying to find out the exact number of vacant properties but they find it difficult to tell me.”

Minister of State at the Department of Housing Malcolm Noonan acknowledged that many cities, towns, and villages are facing the “blight” of vacant properties, which could bring new accommodation and vibrancy to urban areas.

“The Government does not want to see habitable properties lying idle while people are homeless or living in unsuitable accommodation.”

He said that progress has been made on this issues, with the launch of the Town Centre First policy in February, that will take a whole of government approach to regenerating town centres.

“Under the TCF approach, there will be a preparation of town centre plans to identify challenges, actions and integrated responses across a number of themes, including business, commercial, community, cultural, housing, built environment and heritage.”

A number of pathfinder towns will be identified across the country to pilot this approach, he said.

The Minister also highlighted the repair and leasing scheme, which provides funding for private and public property owners to bring vacant properties back into use for social housing.

Beyond this, the buy-and-renew scheme supports local authorities in purchasing vacant homes to repair and utilise.

“Consequently, the scheme is particularly focused on older vacant homes to help tackle the problem of dereliction and to improve the appearance of the built environment in the community.

“Some 735 homes have been delivered through this scheme for social housing purposes since its introduction in 2016.”

Galway-Roscommon TD Denis Naughten said that there is something “fundamentally wrong” with a country in the midst of a housing crisis, which still has 90,000 vacant homes.

“The Northern and Western Regional Assembly has identified 44,905 residential and commercial premises that are empty in the five Connacht counties and the three Border counties of Donegal, Cavan and Monaghan.”

“This is one third higher than Ireland’s total national annual housing requirement of 33,000 homes.”

The housing crisis is not just about a lack of houses, he said, but about failing to get families into empty homes in towns and villages.