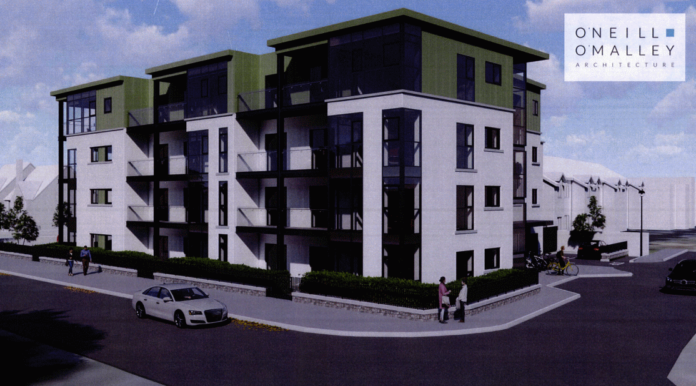 An appeal has been lodged against the city council’s decision to refuse planning permission for the construction of a four storey apartment building in Rahoon.

The proposed development would involve demolishing existing basement structures on the site behind Gateway Retail Park on Bothar Stiofain.

In its place Dragamara Limited proposed to build a four storey apartment block with 18 units, consisting of 4 one-bed apartments and 14 two-bed apartments.

The apartment block would be served by 16 parking spaces. The developer also proposed to close off the existing vehicle access point on Bothar Stiofáin, and build a new access point onto Cloch Ard.

In refusing permission the city council said that the height and density of the proposed apartment block was excessive for this specific area due to a “poor contextual reference”, that it would overshadow neighbouring residencies and affect property prices in the area, and that the proposal does not include enough off road parking.

All of these reasons are being contested by Dragamara. The council’s decision has now been appealed to An Bord Pleanála, which is due make a decision on the application by March 23 of 2021.