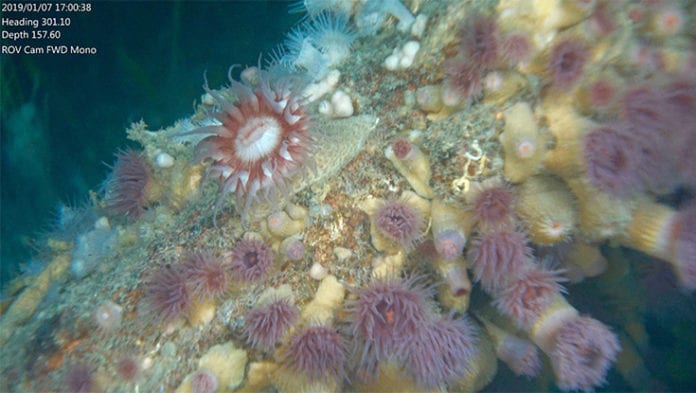 Historic shipwrecks off the west coast of Ireland are forming beautiful artificial reefs sheltering many species normally only found in far deeper waters.

Scientists at NUI Galway, working with partners in Limerick and Ulster University found that shipwrecks are acting as refuge reefs that improve species’ resilience to human impacts and climate change.

The National Monuments Service maintains a Wreck Viewer that lists the location of 4,000 shipwrecks based on a total of 18,000 records of potential wrecks in Irish waters.

In recent years advanced scuba divers have been exploring wrecks as deep as 15o metres below the surface, but no wrecks in deeper waters have been surveyed up until now.

A mixed group of engineers and scientists from the three universities identified numerous wrecks off the coast of Kerry in waters beyond the reach of divers.

Using the Celtic Explorer as a base they successfully located and explored two large wrecks using a remote operated vehicle nicknamed Étáin.

In them they found the ships to be colonised by colourful epifauna: anemones, solitary corals, oysters and brachiopods.

But the biggest surprise was finding a colony of coral reef of Lophelia pertusa, a stony coral species usually found below 500 metres or deeper in Irish waters.

Dr Anthony Grehan of School of Natural Sciences at NUIG, and one of the ocean scientists who made the discovery, said this has major impacts on the protection of marine areas and habitat restoration.

Coral reefs have been one of the major victims of climate change affecting ocean temperatures and acidity.

“Divers report that wrecks are often festooned with corals and other species of epifauna,” Dr Grehan explained.

“As such, the wrecks act as artificial reefs and given the quantity of wrecks in Irish waters, may make an important contribution to maintaining coral and other species by providing refugia and stepping stones for further colonisation or restoration of damaged habitats.

The number of people receiving pandemic unemployment payments in Galway has continued to decline for the third week in a row.There are 25,082 people...
Read more
HOUSING

Today’s announcement of branch closures across the island by Bank of Ireland is the "wrong decision at the worst possible time", a Galway West...
Read more
Facebook
Twitter
Pinterest
WhatsApp