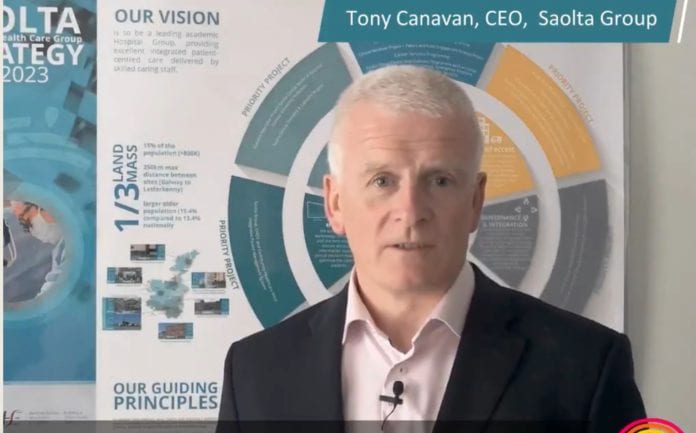 The CEO of Saolta Hospital Group’s Tony Canavan has said that there are big problems ahead for University Hospital Galway, and that more needs to be done to address them.

In an interview on RTÉ Raidió na Gaeltachta on Tuesday, Tony Canavan said that the issues highlighted by Councillor Dáithí Ó Cualáin last week were accurate, and that there is no doubt but that this winter will be very difficult.

“Yesterday we had 23 people in the hospital with COVID-19, four in ICU. There was a large crowd attending A&E, and also a large amount of people on trolleys in A&E awaiting beds,” he said.

He said that they were working to tackle the issues, but that there would be no extra beds in UHG this year.

“We can’t put in more beds this winter in Galway, but there’s no doubt but that more beds are needed. We have a plan to build a new hospital in Merlin Park, but that’s a medium-term plan and we won’t have it this winter.”

“We won’t be able to put more beds in Galway this winter and that’s a big problem.

Tony Canavan also said that from the start of the summer, the numbers in the emergency department have been going up and up and that more people have attended A&E than in 2019.

“If we have problems like that already in the autumn, certainly we will have much bigger problems in the winter, there’s no doubt about it.”