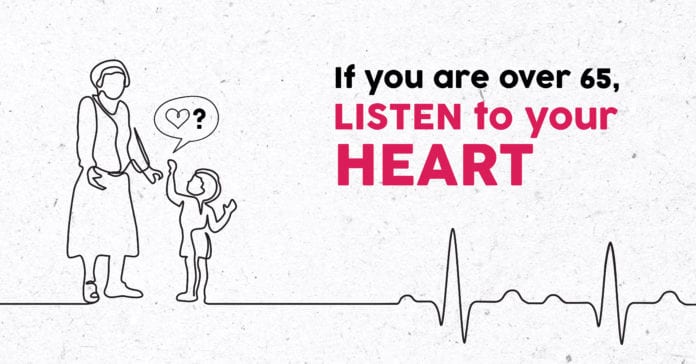 September 14th-20th is International Heart Valve Disease Awareness Week. If you have never heard of it, you’re not unusual. Most people don’t know about it and that is something we need to change.

Heart valve disease is largely a condition of ageing with as many as one in eight Irish adults over the age of 75 likely to develop it. Valve disease in younger people tends to have other causes such as congenital defects or infections.

Worryingly, more than half of those with severe aortic stenosis – the most common form of heart valve disease – will die within two years if left untreated.

This shouldn’t happen because it’s relatively straightforward to detect, starting with a stethoscope examination.

Unfortunately, because the symptoms of heart valve disease such as breathlessness and tiredness mimic the common symptoms of ageing, it very often has a late diagnosis.

That’s why we are urging everyone 65 years and older to ask their doctor to listen to their heart with a stethoscope, at least once a year.

Early detection and diagnosis are key and the good news is that heart valve disease is one of the few heart conditions that has almost curative treatment options through either heart valve repair or replacement.

International Heart Valve Disease Awareness Week is an initiative of the Global Heart Hub and is being led in Ireland by the heart charity Croí. For more information, visit www.croi.ie/valveweek

Thank you for your support.

Over sixty patients on trolleys at Galway hospitals

UHG has the highest number of patients on trolleys in Ireland