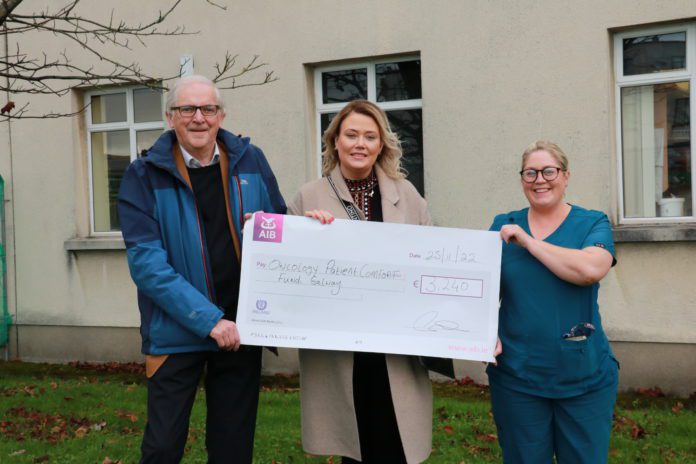 The family of a Durcan Forde, who was cared for in his final years by the oncology ward at UHG, have raised over €3,000 for the hospital in his honour.

The family and friends of the late Durcan Forde, from Sickeen, Woodquay in Galway, donated €3,240 to the Oncology Patient Comfort Fund at the hospital.

The cheque was presented to the Oncology Patient Comfort Fund by Josie Forde, Duncan’s daughter, and friend Terry Small.

The funds were raised by re-releasing a book Durcan, who would have turned 81 this year, had written in the years prior to his sickness.

The father of seven, six daughters and one son, passed away in February of 2020, after a battle with acute myeloma leukaemia.

For two years prior to his passing, he had been a patient of the Oncology Day Ward at University Hospital Galway as he fought his cancer.

Josie Forde said, “We would like to sincerely thank all staff for all the help and support they gave to dad while he was a patient here.”

“We raised the funds in memory of my dad Durcan Forde who wrote the book ‘Sickeen in the Rare Auld Times’ in 2011.”

“After he passed there was such a demand for the book that I decided to re-launch it with Terry’s help and donate the money raised to the Oncology Patient Comfort Fund.”

Sarah Connolly, Clinical Nurse Manager said, “We are delighted to receive this donation for the Oncology Patient Comfort Fund. This donation will enable us to purchase comfort items for our patients.”

A vivid look at the past, Durcan’s book tells the tale of his neighbourhood in the heart of a Galway City that has changed incredibly in the decades since.

The book remains on sale in Kennys book store and Charlie Byrne’s book store in Galway, and money raised from its sale will continue to go to the hospital.

Correction: Durcan Forde’s name was previously misspelled Duncan in the opening of this article.