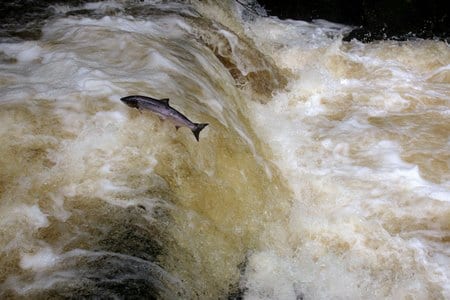 Millions of Atlantic Salmon have been tagged over the past 50 years to map their movements from river to sea and around the world.

The International Council for the Exploitation of the Sea produced recently produced a report documenting half a century of international efforts to tag and track salmon.

Programmes have included tagging of smolts, migrating out from their freshwater nurseries to the sea and their recaptures in high-seas fisheries off Norway and the Faroes, in coastal fisheries around Greenland and upon return to home waters.

Other studies included tagging of adults caught at sea and their subsequent recaptures in home waters in coastal fisheries and by anglers.

“Tagging and related data efforts are crucial as scientists seek to improve understanding of wild Atlantic salmon distribution and migration at sea and the underlying causes of mortality,” said Niall O’Maoileidigh from the Marine Institute, one of the authors of the report.

“This is particularly important given that, despite initiatives that have mitigated some declines, abundance of the species has continued to drop in the last two decades.”

According to the report, salmon tagging in Ireland goes back as far as the late 19th century, though those were strictly from hatcheries.

More consistent tagging programmes began in 1948, and the majority of data we have about Atlantic salmon movements comes from the National Coded Wire Tagging and Tag Recovery Programme which began in 1980.

This involves coded wire tags, less than 2 mm in length, delicately implanted into the nose cartilage of fish.

This report not only documents the history of these tagging programmes, but also investigates migration patterns, timings, return rates, their changes and patterns.

Over eight million salmon smolts were tagged and released between 1980 and 2012.

The majority of those were in hatcheries, but many wild salmon were also tagged in rivers along the west coast.

Of foreign tags recovered from salmon in Irish waters the majority were from the UK, though in recent years significant numbers of salmon from Spain and Denmark have also been found in Irish waters.

However, with current technology e-tagging is becoming far more informative, giving rise to information not only of the ‘when and where’ of tagging-releases and recaptures, but also on the movements, routes, depths and behaviors in-between.”