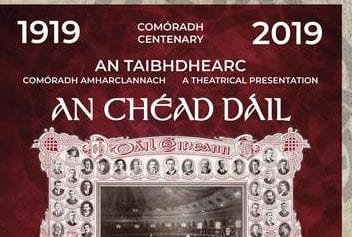 A special performance to commemorate the First Dáil will be held in Galway exactly one hundred years from when the first democratic gathering of the revolutionary Republic of Ireland was held.

The free event, hosted by An Taibhdhearc, the national Irish language theatre, will take place on 21 January.

The day will begin with a parade from An Taibhdhearc through the streets of Galway, as far as the Eyre Square Shopping Centre.

Actors will re-enact the happenings of the house of the Lord Mayor of Dublin at 3:30pm.

The actors playing Teachtaí Dála will be accompanied by members of the Tulla Pipe Band from County Clare.

All of the events are free of charge, but it is advised to pre-book your seats for the event with Professor Ó Tuathaigh, the theatre has limited seating.

A short publication to commemorate the event will be issued, and refreshments will be available.