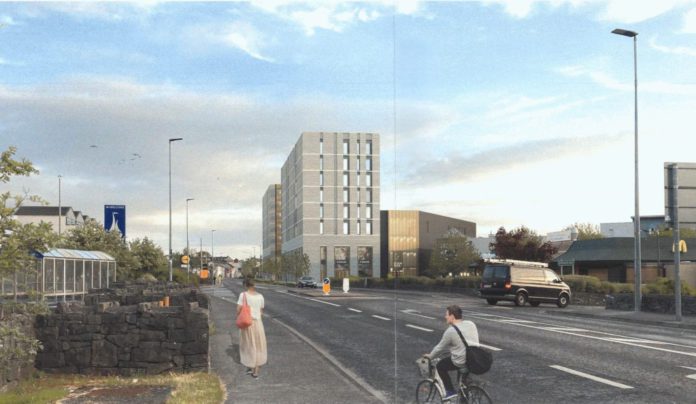 Galway City Council has okayed plans to significantly increase the number of bed spaces in a student accommodation development on the Headford Road.

Planning permission has been granted to Cleverson Ltd for revisions to the plans for a seven storey student accommodation complex next to Galway Retail Park, which has yet to be built.

The biggest change in the plans in the application was to increase the number of bed spaces in the development by 49, up to 272 in total.

The floor plans have been modified to incorporate ‘clusters’ of single rooms grouped around a communal living room/kitchen, with the remainder of the units being single or double bed space units with an internal kitchen and living area.

These layout changes mean that, despite the 49 extra bed spaces, the total number of apartments is only increasing by one.

The city council inspector’s report stated that the number of bed spaces is acceptable considering the city centre location, and the additional communal facilities coming from other alterations to the plans.

Approval has also been given to replace a commercial gym on the second floor with communal space, and for amendments to three retail units, while a fourth would be converted to offices.

The communal facilities for students will include a lounge, a library, a cinema, and a gym area for them alone.

The council inspector said that it was “necessary and important” that the amount of communal facilities be increased if the number of students staying there would also be going up.

Cleverson Ltd first received approval from An Bord Pleanála for 223 bed, student accommodation development on the Headford Road in Galway City in July of 2021.

Planning permission for the newly altered student accommodation complex was granted by the city council with six conditions attached.

Condition No. 5 stipulated that all of the communal facilities must be ready for use before any of the bed spaces are occupied.

The council also insisted that the access route from the Headford Road must allow the public to access the car park to the rear of the site.