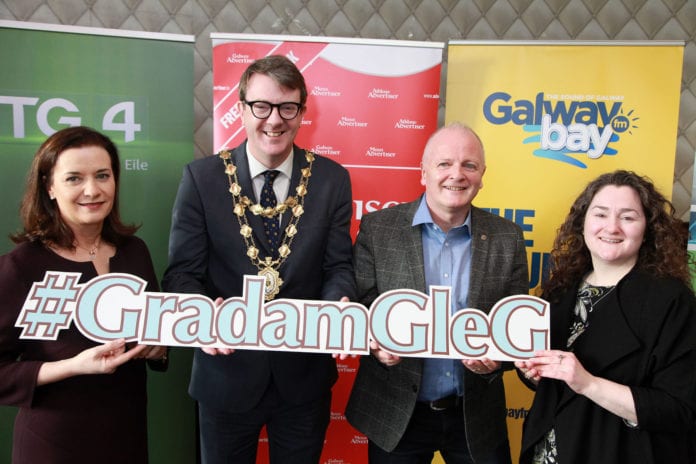 The finalists of this year’s Gradam Sheosaimh Uí Ógartaigh who promoted the use and visibility of the Irish language in their businesses will be unveiled next week.

Mayor of Galway Niall McNelis will announce the finalists of Gradam Sheosaimh Uí Ógartaigh at an event in Galway Chamber at midday on April 24 before the go forward to the next step of judging.

The finalists were selected last week by a group of moltóirí assembled by Bord Stiúrtha Ghaillimh le Gaeilge.

Sustainability, Service in Irish and Visibility of the Irish language in business is what the Moltóirí rated highly when they met for the first time to review and evaluate all of the bilingual work undertaken by the Gradam nominees over the last few weeks.

The winners will be chosen by a panel of independent judges with a wide range of expertise: Rónán Ó hÓgartaigh, son of the late Seosamh Ó hÓgartaigh, who the award is named for and founding member of Gaillimh le Gaeilge, Deirdre Ní Choistín, Léiritheoir/Eagarthóir MOLSCÉAL, and Freda Nic Giolla Chatháin, Oifigeach Cumarsáide Gaeilge, Gaillimh 2020.

“We are delighted that the Gradam has proved to be a very successful initiative to reward and motivate businesses and organisations to use and promote the Irish language in Galway City.”

“It’s always great to see the diverse range of businesses in both sector and size taking part in the Gradam,” Bernadette added.

“Their efforts and commitment to the use of the Irish language continues to improve and strengthen our status as a bilingual cultural city. Gach rath ar na hainmniúcháin ar fad.”

The nominees for Gradam 2019 are as follows: