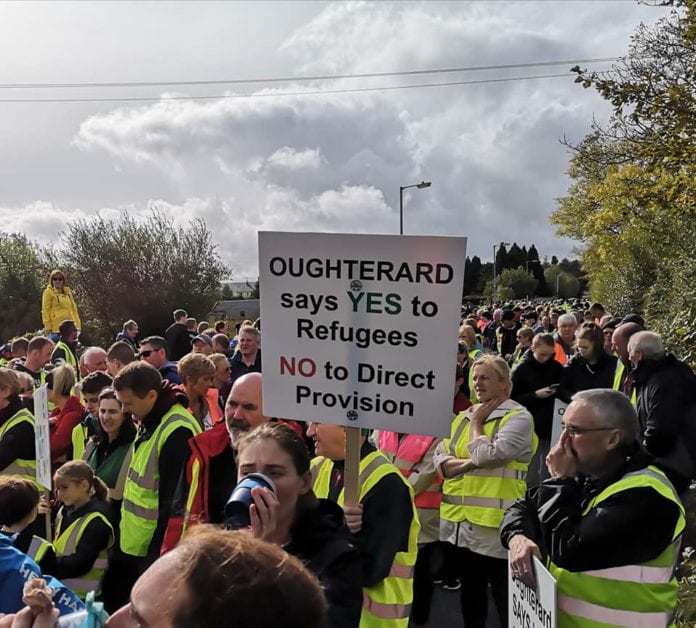 Harsh criticism has been leveled at the government over how it has responded to the local community in the direct provision centre controversy in Oughterard.

Up to 3,000 people marched peacefully through Oughterard to the Connemara Gateway Hotel on Saturday in an ongoing movement of protest against any plans to put a direct provision centre there.

Patrick Curran, a local businessman and head of the ‘Oughterard says no to inhumane direction provision centres’ community group said that the civil service and Minister of State for Immigration and Integration David Stanton are in complete denial about the inadequacies of the system.

He was highly critical of the manner in which they have engaged with the community, when at all, saying that they have displayed “Evasiveness, incompetence, contradiction, disdain, and bluster”.

The ‘Oughterard says no’ group have said that they welcome people to the community, but that Direct Provision is an “inhumane” system, and that people in Oughterard are overwhelmingly opposed to it. 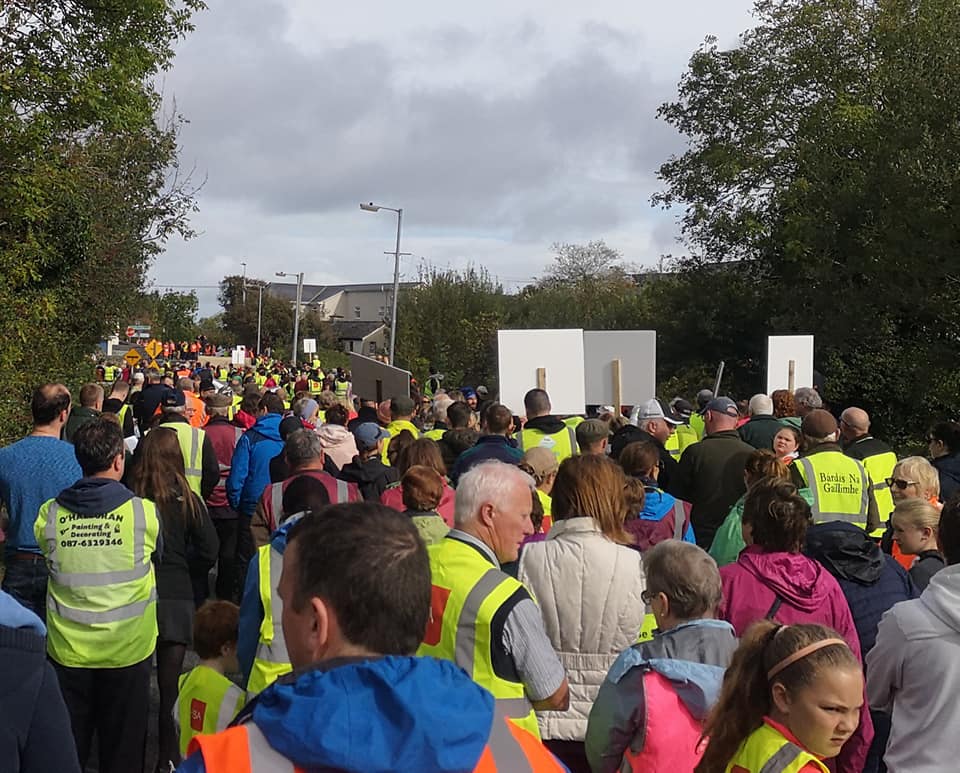 The Justice Department has said that no contract has been signed for a direct provision centre in Oughterard at this point and refused to comment further saying that it is bound by the contract process.

However Patrick Curran said that a meeting held between a group of local delegates and Sean Lyons of Fazyard Ltd, the company seeking to secure a tender for accommodating refugees in the west, shows that it is untrue that locals cannot be consulted before a contract is awarded.

One of the greatest frustrations expressed by locals during this time has been that work on the Connemara Gateway Hotel has been ongoing throughout this process while the Department of Justice has been saying that no decision has been made.

According to Mr Curran when Galway West TD Noel Grealish asked Minister Stanton how so much work could be carried out on site without a contract in place the Minister told him that a verbal agreement could be in place.

“What we have experienced sickens us,” Mr Curran said. “We worry for the asylum seekers, this community, and for the Irish people all of whom are forgotten in this disgraceful system.” 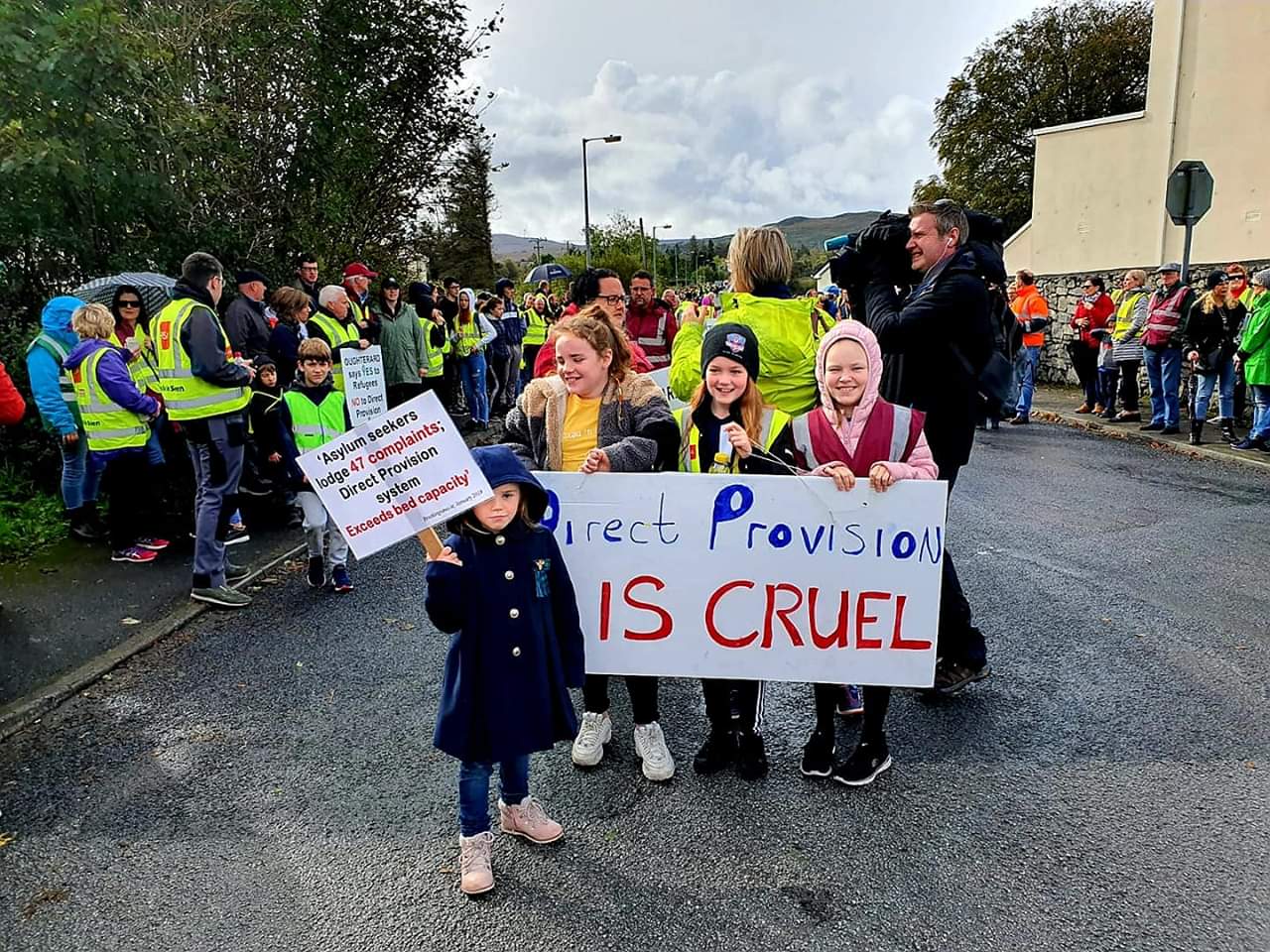 Noel Grealish sparked controversy on this issue with remarks he made at a public meeting attended by roughly 800 people earlier this month in Oughterard.

The Independent TD said that asylum seekers from Africa are economic migrants coming to Ireland to “sponge off the system” and that they weren’t genuine refugees like Christians fleeing ISIS in Syria.

While there were many calls for Deputy Grealish to apologise for these comments other remarks he made saying that a small town like Oughterard can’t handle several hundred people packed into a direct provision centre have been echoed by concerned locals.

Shortly after the march in Oughterard on Saturday a rally was held in Eyre Square by the Galway Alliance Against Racism with several hundred people in attendance.

GARN condemned a “rising racism” in Ireland and the Direct Provision system which they have also said is an inhumane way of handling refugees.

The rally was attended by Galway West TD Catherine Connolly and Mayor of Galway Mike Cubbard who said that racism has no place in the city.

The Taoiseach is now being asked to directly intervene in the matter and cancel any plans for “secretly” placing a direct provision centre in Oughterard without consulting the community.

“We ask you to to work with a delegation from Oughterard and other community groups across Ireland to come up with a solution which is humane, fair, democratic and transparent for the end users the asylum seekers and the people of Ireland you are meant to represent the interests of,” Patrick Curran said in a direct plea to the Leo Varadkar.

“Not the small handful of DP centre entrepreneurs and their government contacts who seem to be the  only people that really benefit from this system which exploits vulnerable people by turning the asylum system into a get rich at the expense of the vulnerable scheme. ”

Peaceful protesters have been maintaining a picket outside the Connemara Gateway Hotel after the big march yesterday, the same as was done after a previous march earlier this month.