Gardaí called to courthouse on opening day of case against NUIG 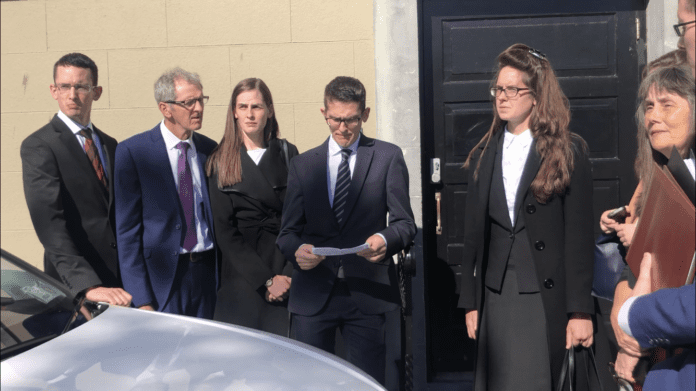 To say there was a tense atmosphere in Galway Courthouse yesterday evening is an understatement as gardaí had to be called to the case of four Burke siblings against NUIG.

They refused to leave the court at the end of the day, demanding to receive clarification as to whether they are being allocated a new Judge to oversee proceedings in their case against NUIG.

It was approaching 5.30pm and the four Plaintiffs; Issac, Kezia, Enoch and Ammi Burke, were still in the courtroom refusing to leave.

Unfortunately for the plaintiffs, the Judge had been gone for over an hour at this stage and the staff were adamant that it was time for them to leave.

The plaintiffs refused, saying that they have had to  wait “five years to get justice” while having with them “fifty pages of submissions and two hundred pages of exhibits”.

The Plaintiffs are made up of the same family and were all at one point in time students at NUIG.

They claim that NUIG discriminated against them on the grounds of their religion when they were banned for life from all university societies.

NUIG claimed that the four siblings were banned for the misuse of funds from the Christian the Christian Union and Life societies.

The Burkes deny misusing funds and alleged that the ban came after reported “bullying, harassment and intimidation” against them.

On the eve of today’s case the decision was made to lift the lifetime ban on the four siblings and NUIG offered not to seek costs of the Burkes withdrew their legal case against the University.

The Burkes rejected this settlement and pressed ahead with yesterday’s proceedings.

In a statement to Galway Daily, Issac Burke stated that NUIG merely lifted the ban “without acknowledging any discrimination or victimization”.

At the opening of the day counsel for NUIG raised the lifting of the ban with the Judge in court.

The Burkes allege that the judge made comments regarding the lifting the ban which showed that she was prejudging the case.

Isaac Burke said this “demonstrates a profound disregard for the lasting and awful effects” of the sanction over the past five years on the four plaintiffs.

The Burkes eventually asked the Judge to recuse herself from the case, claiming they had no confidence in her ability to judge the case impartially.

As a result of this impasse, the Judge ordered a stay of proceedings which is a ruling by the Court suspending proceedings.

The court can subsequently lift the stay and resume proceedings at another point in time.

The four plaintiffs were dismayed with this ruling and refused to leave the courtroom until they had another chance to speak to the judge.

This led to a standoff between the courthouse staff and the plaintiffs lasting over ninety minutes.

Gardaí were called to remove the Burkes, and they subsequently entered the courthouse and ushered the plaintiffs outside.

The Burkes left the courtroom without incident and none of them were charged with any offence.

The siblings a statement from behind the courthouse declaring their intention to seek a new Judge to oversee their proceedings against NUIG.