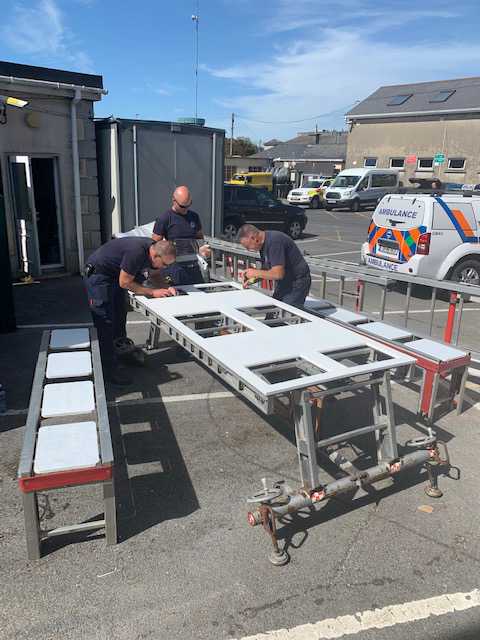 An Mheitheal Rothar and the Galway Fire Brigade were among nine worthy winners in this year’s national Upcycle Challenge 2020.

The Fire Brigade saved three ‘retired’ ladders from the scrap yard and used them to make an outdoor seating area which they set up in the station yard.

An Mheitheal Rothar upcycled an old bank vault on the Headford Road into a pop up shop to sell their upcycled bikes during the Covid crisis.

The Upcycle Challenge by mywaste.ie and the Environmental Protection Agency (EPA) invited participants to use their imaginations to create something new and useful out of old unwanted and discarded items or material.

Overall, 259 entries were received from individuals, community organisations, Men’s Sheds, and schools across the country.

Eight category winners were decided by a judging panel, who also chose three finalists for a People’s Choice Award.

Paul Moran, Blue Watch, Galway Fire Brigade said: “Call us sentimental, but we wanted to come up with a way to preserve a part of our local Fire Brigade heritage.

“The ladders are quite large, heavy and bulky items, so we wanted it to be something we could use, as opposed to just hanging it up on a wall.

“After much deliberation, and many iterative design phases, we finalised a plan that would see us re-use practically all of the ladders we had available to us.

“The plan was to create a large enough dining space for 8-10 people, but we also wanted key working parts of the ladder to be visible to all.”

During November, the public voted for the three finalists on mywaste.ie social media platforms.

The Irish public decided the overall winner to be Ann Mc Kenna from County Monaghan who upcycles the clothes of people who died to make memorial bears for their loved ones.