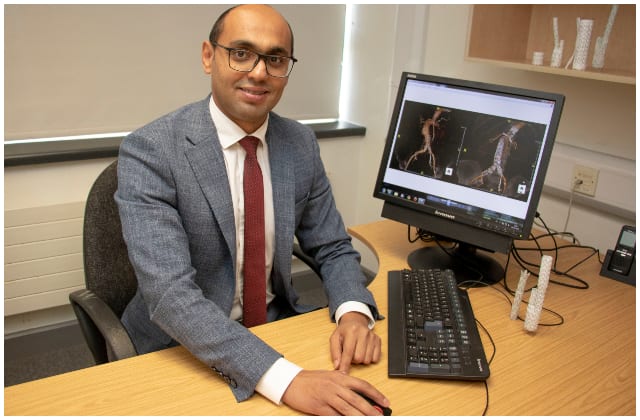 Galway University Hospitals have welcomed a new addition to their ranks of surgical specialists with the appointment of dr Mahmoud Alawy as a Consultant Vascular Surgeon.

From August 2018 he worked as a Senior Clinical Fellow at Guy’s and St Thomas’ NHS Foundation Trust, London for one year.

Prior to coming to Ireland Dr Alawy spent seven years in Ain Shams University Hospitals and Wadi El-Neel Hospital in Cairo for his Vascular Surgery training.

“An aneurysm occurs in the wall of a blood vessel due to weakness or degeneration of the artery wall and as it enlarges, it compromises the artery wall’s ability to stretch and risks rupturing.”

“I have a special interest in minimally invasive surgery techniques to treat aneurysms and other aortic problems.”

He added that he is delighted to bring this expertise to Galway where he will be treating patients from across GUH’s wide catchment area.

Dr Alawy studied at the Ain Shams University in Cairo, Egypt with qualifications including an MBBCH in Surgery and Medicine (2004), Master of Science in General Surgery (2008) and an MD in General Surgery/Vascular Surgery subspecialty (2011).

In 2017 Dr Alawy graduated as a Fellow of the Royal College of Surgeons in Ireland, and in the same years achieved honours in the Fellow of the European Board of Vascular Surgery awarded by the European Union of Medical Specialists (UEMS).

Last year he joined the Specialist Register of the Irish Medical Council (IMC) in the specialty of Vascular Surgery which has been recognised as a new surgical specialty by the IMC due to an increase in the volume and complexity of vascular conditions and the development of new minimally invasive techniques.

Ms Chris Kane, General Manager of Galway University Hospitals said “We are very happy to welcome Mr Alawy back to Galway and to add his skills and experience to our Vascular Surgery Department where we see an increasing number of patients presenting with complex conditions requiring treatment.”