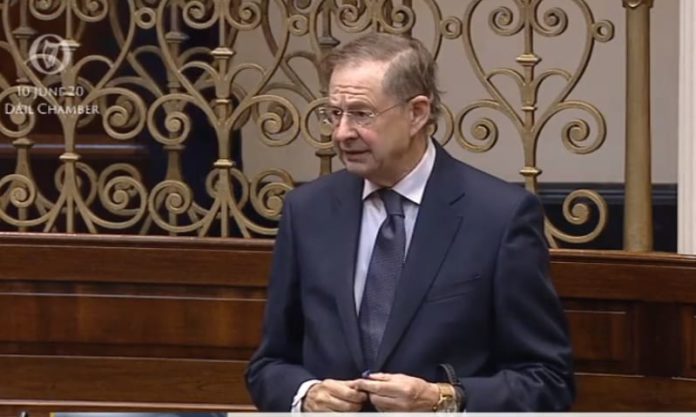 A Galway West TD has asked if the government considered at any point reopening the mortgage interest supplement scheme due to the significant loss of income for many homeowners on Pandemic Unemployment.

During a meeting of Joint Committee on Social Protection, Community and Rural Development and the Islands this week, Deputy Eamon Ó Cuív said that people on the highest band of the PUP, receiving €350 a week, are only at an average of 58% of what they were earning beforehand.

While many of those would be eligible for rent supplement if they are in rental accommodation, there is no statutory equivalent for people who own their home and pay a significant portion of their earnings in a mortgage.

“Further up the income scale, a fair number of the people affected would have significant mortgages and young families,” Eamon Ó Cuív said.

“I understand that such a person would not be entitled to child dependent allowance and there is no mortgage interest supplement.”

The Mortgage Interest Supplement Scheme, which provides assistance to make mortgage interest payments, has been closed to any new entrants since 2014.

At the start of the pandemic the government made arrangements with lenders to introduce mortgage payment breaks, during which time people could have their mortgage payments and interest deferred.

However, the interest that was due during this time still accumulated, and will be added to the repayments of people coming off the break when they do.

The Independent TD asked if any consideration was given at the outset of the pandemic to reintroducing the mortgage interest supplement scheme as a policy instrument, instead of informal arrangements with banks.

Deputy Ó Cuív noted at the Committee debate that banks are not charitable organisations, “They are run by hard-headed business people and if someone gets a moratorium on repayments, the banks will come after them, looking for that money back.”

The arrangement the department of finance made with the banks only had the effect of “pushing the can down the road” for people with mortgages.

“The mortgage interest supplement, which used to last for as long as a person was unemployed and ended the minute he or she went back to work, meant that person had no accumulated interest and would not be going cap in hand to the financial institutions, which are not charities.

“I just do not understand the rationale for the suspension. Maybe somebody in the Department could give us the policy reason for it,” Deputy Ó Cuív said.

Deputy Denis Naughten, Chairman of the Committee, added that it might make sense to reintroduce the mortgage interest supplement in light of the fact that the arrangement made with lenders has now run its course.

He also raised the fact that the Tánaiste has hinted at the possibility of renewed restrictions in the new year to suggest that the supplement should be reintroduced.