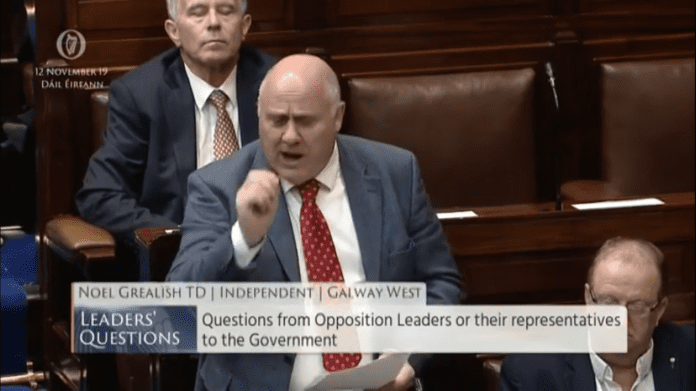 Galway West TD Noel Grealish has been labelled a ‘disgrace’ after comments he made in the Dáil yesterday.

The Independent TD was accused of ‘disgraceful racism’ when he raised questions to the Taoiseach about the amount of money being sent out of Ireland to other countries.

Deputy Grealish said he could understand money being sent to the UK, but he described the amount of money sent to Nigeria in the past eight years –  3.5 billion euro – as ‘astronomical’.

“Over the past 8 years alone over €10 billion has left this country by way of personal transfers; this is a staggering amount of money,” he said.

The CSO today confirmed these figured are not correct.

The Galway West TD was called ‘a disgrace’ by Ruth Coppinger TD when he questioned whether the money leaving Ireland was earned illegally.

In response, An Taoiseach Leo Varadkar did not dispute Grealish’s numbers, but questioned where he was going with this line of questioning.

He said that every person in the House knows from stories their parents or grandparents told them, that for many centuries, Irish people went all over the world and sent back remittances to Ireland.

The Taoiseach said: “I remember my grandmother, all of whose family went to America, telling me about the cheques coming from the US.

“If the Deputy walks a few metres across Merrion Square into Holles Street Hospital, he will see a hospital full of midwives from India, nurses from the Philippines and doctors from Egypt, Pakistan and I do not know where.

“They work hard and pay their taxes.

“Out of their post-tax income, they send some money back to their families, who probably paid for their education.

“That is the way the world works, and it is the way Ireland worked and still will for decades.”

Minister Charlie Flannagan then reminded the Galway TD that more remittances came back to County Galway than to most other counties from the United States.

The Galway Anti Racism Network has called on Grealish to resign.