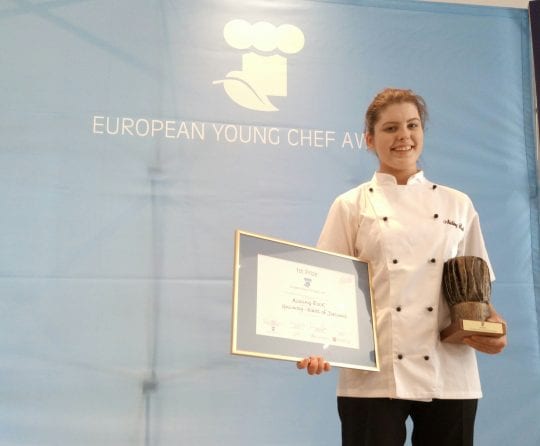 GMIT student Aisling Rock has won the European Young Chef Awards for 2017 in Catalonia with a dish inspired by the west of Ireland.

She impressed the international jury with her dish: Mackerel, Pickle, Sheep Yoghurt, and she was announced as the winner of the competition today in Barcelona by Greek celebrity chef Argiro Barbarigou.

Based on the traditional recipe Salted mackerel with root vegetables and potatoes, the innovative dish was prepared using fish preserved with a curing method form the gastronomic heritage of Galway and seasonal, locally grown vegetables.

A taste of the strong sheep farming tradition of Galway was conveyed by sheep yoghurt.

The jury not only considered the taste and aesthetics of the dish, but they also assessed the level of innovation with respect to the traditional recipe, the use and valorisation of local products and the creative narrative of the dish’s cultural connections to the region, which Aisling successfully communicated during her presentation.

Argiro Barbarigou remarked on the high level of the finalists’ technical skills that made it difficult for the jury to select the winner.

She applauded the concept of the competition, highlighting the importance of nurturing young talents and supporting the use of local food products in professional kitchens.

She congratulated participants for the amazing and creative work shown during the competition, she was convinced by their dedication and wished them all well for what she knows will be highly successful careers.