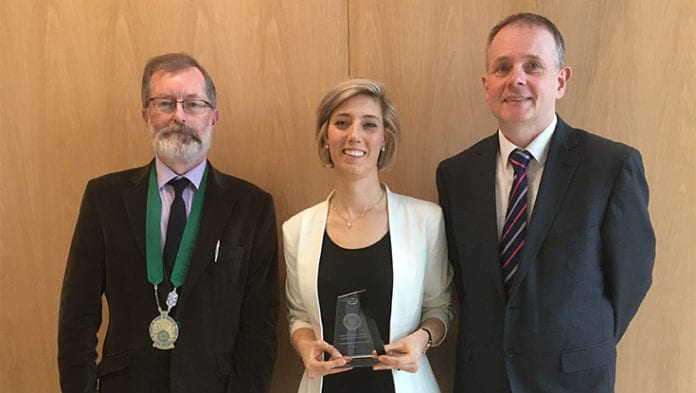 Adele Gabba, PhD student at NUIG, has been awarded the inaugural Institute of Chemistry Postgraduate Award for her research into viral infections.

Originally from Italy, Adele is an Irish Research Council funded PhD scholar at the School of Chemistry at NUIG in the final year of her study.

She has been researching the synthesis and evaluation of ligands for the protein CLEC10A.

This protein is found in the surface of cells in the body’s immune system and plays a role in the spread of certain viral infections such as the Ebola virus.

The Institute of Chemistry of Ireland gave Adele this award for her outstanding contribution to research, also acknowledging all she has done to promote science at NUIG outside of the lab.

Adele has been very active in Kitchen Chemistry, which contributes to public events such as the Galway Science and Technology Festival, and has also taken part in FameLab and Soapbox Science.

Professor John Cassidy, President of the ICI, praised her for the excellence of her research and the mentorship that she provides younger students.

Aside from NUIG Adele’s work has taken her to ISAS in Germany to the laboratory of Ulrika Westerlind, supported by an EMBO travel award, and to the Beth Israel Deaconess Medical Centre (affiliated with the Harvard Medical School in Boston) to the laboratory of Gabriel Birrane.

“She has truly embraced all that a PhD can offer in terms of her own research excellence, exposure to other research areas, training as a science communicator and inspiring the next generation of STEM students.”

“Once she finishes in NUI Galway we look forward to seeing bright career ahead for her.”