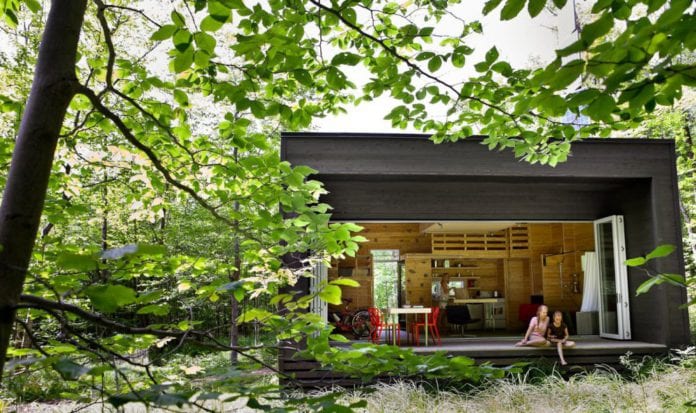 A Galway based start up has won a €3 million euro contract to provide high end prefab homes for eco-friendly tourism in Canada.

Zoobox is a local company developing pre-fabricated cabins for ‘glamping’ and people who want an environmentally friendly holiday.

So far Zoobox, based out of the Portershed in Eyre Square, has raised €5.5 million from investors to help them to supply cabins for sale in Ireland and around the world.

According to the Irish Times Chief Executive of Zoobox Guillaume Pellerin confirmed that they’ve won a contract to provide 15 cabins to a Canadian company in a deal worth four million Canadian dollars (€2.7m).

The Canadian partner plans to use at sites likely to attract “eco-tourists” who want to experience parts of nature that are still untouched.

It’s expected that the 15 high end holiday cabins will be delivered sometime next year.

Zoobox is the brainchild of Guillaume Pellerin and his business partner and company president Alain Chagnon who came to Ireland in January of last year to start their business.

Thought the company is headquartered in Galway, the cabins are produced at a factory in Inchicore on Dublin’s southside.

They’re currently hiring between 10 and 12 people to help deliver on this order and other holiday homes for Ireland.

Though now specifics have been confirmed yet, Zoobox is said to be eyeing five sites in Ireland, with at least one in Galway.

After their first round of fundraising attracted €5.5 million from private and institutional investors, Zoobox is now looking to raise a further €10 million to continue to expand.

Mr Pellerin said their market is for tourism that lets people get away from the hectic nature of modern life without damaging the environment.

The high-end cabins are completely self-sustaining with individual solar panels and wind turbines for electricity; while the water supply and waste disposal will be dependent on each site.

Modern work and home lives mean that people spend as much as 90 percent of their time indoors, Mr Pellerin said, sitting in front of a screen up six hours a day.

This is driving people back to the wild as there’s a major trend in holiday making for people who want an opportunity to unplug, or at least get some fresh air.

The idea behind Zoobox is that while people want to get back to nature, they still want to keep the amenities of modern life, “the highest level of glamping,” their chief executive calls it.

The cabins, made of glass, wood, metal alloys, and composite material can comfortably fit up to six people for your nature experience.

In business, Zoobox will supply the holiday cabins and take a share of the rent, which will be set at €200 per night for a family of four.