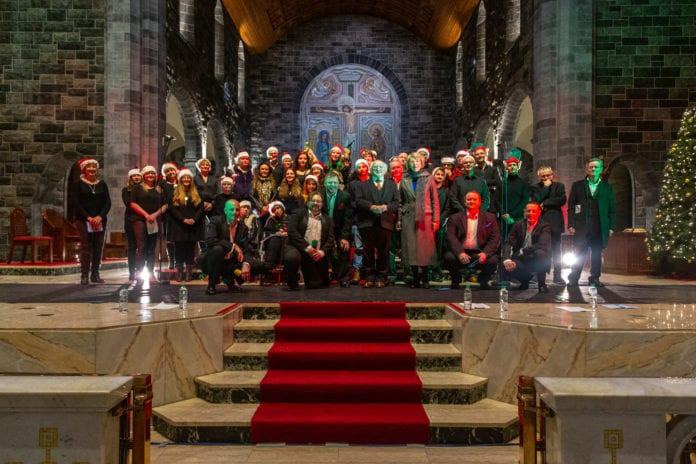 President Michael D Higgins and his wife Sabina were among an audience of three hundred people as the Galway Simon Music Project – the local charity’s version of the Dublin-based ‘High Hopes Choir’ – took to the altar at Galway Cathedral on Saturday night.

The 4th annual fundraiser took place on Saturday in aid of Galway Simon Community and saw powerful performances including the big hit ‘From Now On’.

All proceeds went towards the charity’s ‘Essentials Fund’ which supports individuals and families to prevent them from becoming homeless.

The performers on the night included The A Capella Knights who hosted the concert along with guests Galway City Youth Choir, Frenchville Brass Ensemble, Hession School of Dance and Galway Simon’s very own Simon Music Project which was one of the highlight performances of the night.

Karen Golden, CEO of Galway Simon Community explained the impact the Simon Music Project has on its members and why the performance was a particularly powerful one.

“Last Thursday night, I attended the final rehearsal of the Galway Simon Music Project in Shantalla Community Centre,” she said.

“For me, the rehearsals symbolised in a very powerful way the reason I was on stage in Dublin two nights earlier at the Charity Impact Awards, to hear the significant impact of Galway Simon Community’s work acknowledged and showcased on the national stage.

“The Music Project is the coming together of volunteers, clients, staff, donors and supporters to sing together, to enjoy the music and company, and to support our community through the A Capella Knights concert, the highlight of this year’s Music Project.

“When the Galway Simon Music Project took to the altar last Saturday night at the A Capella Knights Christmas Concert and sang ‘From Now On’, there was an extraordinary energy about the performance.  And it brought many people to tears.

“The icing on the cake was to have President Michael D. Higgins and his wife Sabina in the audience who we were honoured to have attend the concert in a private capacity.

“This time last year at A Capella Knights concert, I was introducing myself as Galway Simon’s new CEO. Throughout my first year, it has been disturbing to see first-hand the effect that the homeless and housing crisis is having here in Galway, the community where I grew up. Sadly, 40 years on from when Galway Simon was founded, things are getting worse rather than better.

“However, the outstanding support that we receive day in day out from our supporters in Galway, Mayo and Roscommon is what enables us to help people to leave homelessness behind them for good.

“We want to extend our sincere thanks to our local communities for their extreme generosity and kindness throughout the year, that has enabled us to support over 500 households so far this year. Our work would simply not be possible without this support.”