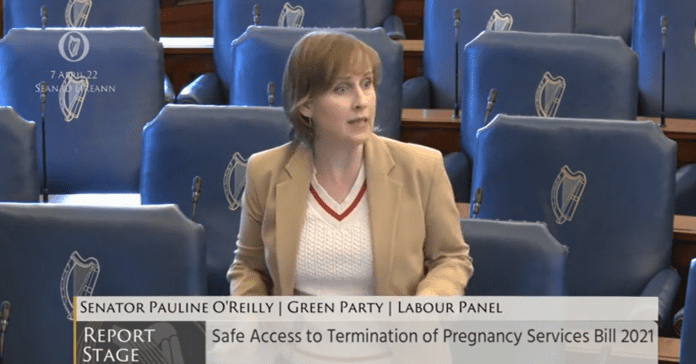 The Green Party Senator said that accusations of fascism showed why such legislation and safe zones are necessary for women.

During the debate on the bill, Senator Ronan Mullen said on more than one occasion that the proposal was “flirting with fascism”, and also accused it of having a “radical marxist revolutionary” element as well.

He said that the bill was prohibitive of people’s right to freedom of speech.

Senator O’Reilly was deeply critical of this kind of language, adding that the people expressed their will in the 2018 referendum, and that the majority of government and opposition supported creating safe access zones.

“In all of the contributions where dangerous language is being used around fascism and all of those things it shows that this is exactly what can happen when one does not have safe access zones.”

“We have seen it in the US. We need to stop and ensure that our society does not turn into that.”

“People have had their say, we had a referendum in 2018, and regardless of what one’s views are on that, I believe that we are united, certainly across Government, when it comes to safe access zones, and across the majority of the Opposition.”

The bill is meant to prevent anti-choice activists from protesting outside healthcare facilities offering abortion services.

It would create a 100m safe access zone outside of any premises offering pregnancy or contraceptive services.

Several amendments to the bill put forward by Senator Sharon Keoghan, and seconded by Senator Mullen, were rejected at the debate.

Galway TD and Minister of State Anne Rabbitte stood in for the Minister for Health as the bill passed the Seanad on Thursday.

She said that the government would not be accepting any of the amendments to the bill proposed that day.

The bill passed the Seanad at the end of the debate, and will proceed to the Dáil stages.