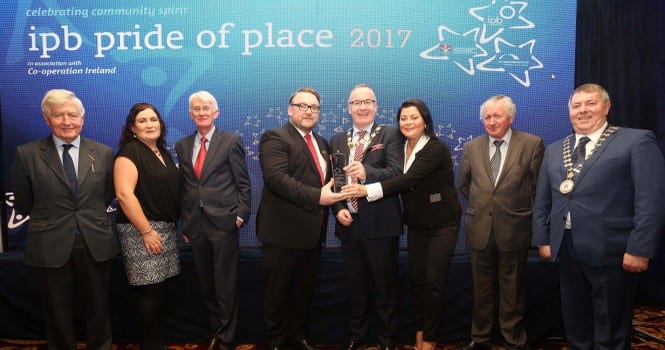 Galway was among the winners of the IPB Pride of Place Awards which took place last night in Letterkenny.

In the cities competition, The Village Salthill won top prize in category Urban Neighbourhoods / Villages with a population over 2,000.

The awards acknowledge the achievements and the invaluable work undertaken by volunteers and those involved in local community development.

The ceremony was attended by almost 1,000 people and presented by RTÉ News’ Aengus MacGrianna.

“The association has generated a significant record of achievement, including a greater sense of community developed by their activities, which was abundantly evident for the judges to see.”

During the ceremony 49 awards were announced in the main competition, the cities competition and special awards, ranging from groups supporting small rural communities to those involved in large inner city housing estates.

Donegal County Council hosted the evening and celebrated Irish musicians Donal Lunney and Paddy Glackin entertained the audience before the winners were announced. RTE presenter Aengus MacGrianna was MC for the ceremony.

Sponsored by IPB Insurance, the Pride of Place competition was initiated 15 years ago through a Co-operation Ireland programme to acknowledge the invaluable work undertaken by communities and groups across the island of Ireland. It has grown into the largest competition recognising community development achievements.

Cathaoirleach of Donegal County Council Cllr. Gerry McMonagle said: “I am delighted that Donegal has been chosen to host of this prestigious awards ceremony and that we welcomed over 800 people to celebrate and recognise the wonderful contribution that community groups make to life in their own local areas all across the island of Ireland.

“This has been a great opportunity to showcase what Donegal has to offer and I hope all our visitors have had a wonderful experience and that they bring home with them fond memories of their trip to Donegal.”