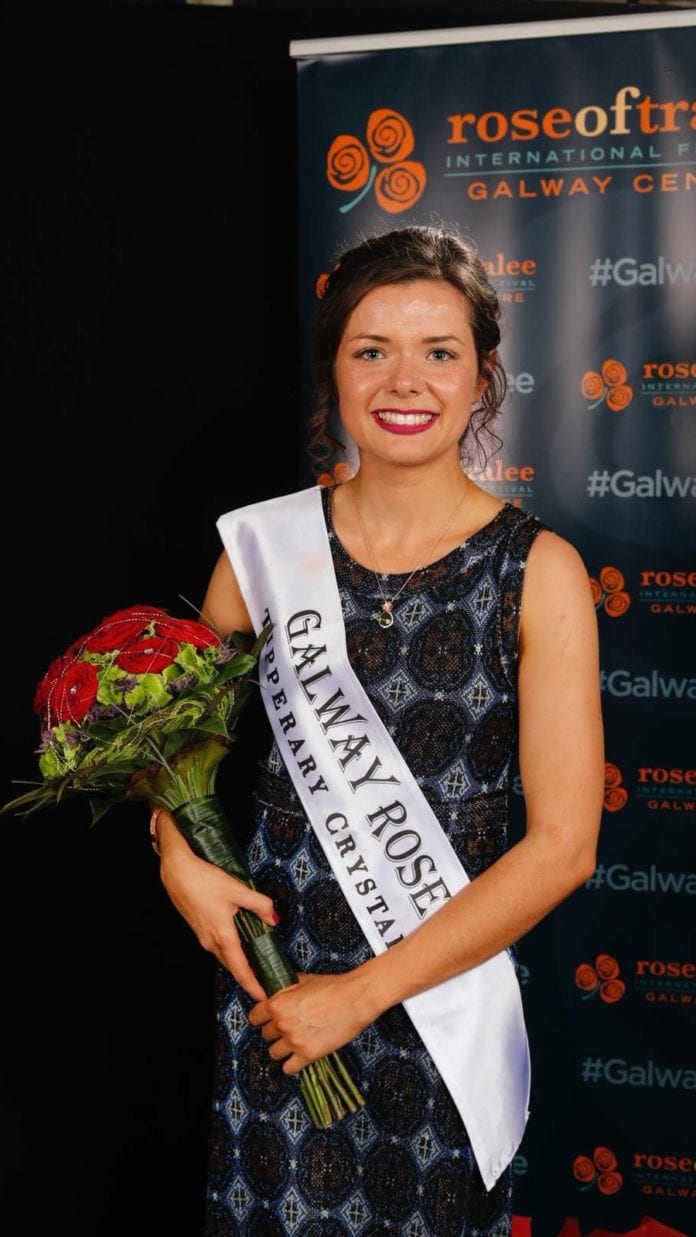 Saturday night saw the selection of a new Galway Rose as Niamh Elwood who had been an ambassador for the City of The Tribes over the last year handed over the sash.

On Saturday night at an event in the Clayton Hotel, Niamh Elwood who has spent the last year being an ambassador for Galway handed over her sash to the 2018 Galway Rose Deirdre O Sullivan.

Deirdre O’ Sullivan (24) was being sponsored by Croí on the night. She is from Corrandulla and a primary school teacher in St Clare’s Primary School, Dublin.

The 24 year old spent her childhood summers in Tralee, and the Rose Festival was always the highlight.

A proud volunteer with Croí, she enjoys being a leader for the active school flag at work, part of which involves coaching hurling. She has recently launched an active school walkaway in St. Clare’s.

As a former member of the Galway Youth Orchestra, Deirdre plays the flute at a professional level and has played in The National Concert Hall.

She entertained the audience by playing the classical flute onstage at he 2018 Galway Rose Selection Night.

After the Summer of 2017 touring Europe, a trip to Ghana to volunteer is planned for this Summer. Travel is very important to Deirdre, but her greatest passion is teaching.

Deirdre was one of 29 girls who were all hoping to be crowned this years Galway Rose, with Deirdre winning out in the end as she now takes the Sash onto Tralee in August.

Deirdre has been receiving much love and support from family and friends as well as sponsors following the selection night. Her sponsor Croí tweeted their delight at her selection.

The Galway Rose Centre are delighted to welcome Deirdre O’ Sullivan as this years Galway Rose but also thanked Niamh Elwood for her year long stint as an ambassador for the City of The Tribes.

What an amazing ambassador our 2017 #Galway Rose Niamh has been for her original sponsor @noxgalway , her parish&her county. She flew the flag with pride at the @RoseofTralee_ last Aug &we have been incredibly proud of her during every moment of her year #GalwayRose #roseoftralee pic.twitter.com/sVAAWpB1pl