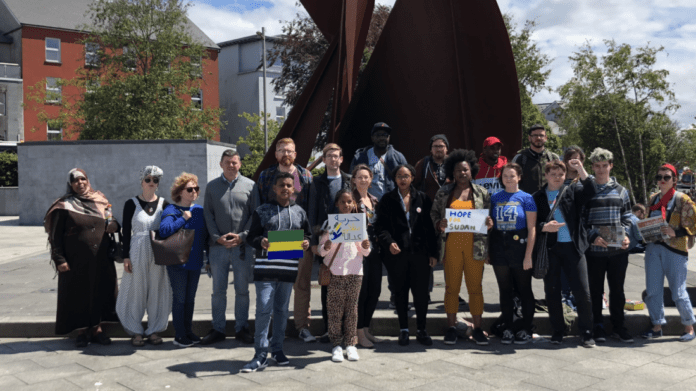 On Saturday, the group ‘solidarity with Sudan Galway’ organized a protest in Eyre Square to highlight the recent atrocities committed against the people of Sudan.

The protest revolved around the recent attacks by the RSF (Rapid Support Forces/Janjaweed) on the people of Sudan on the eve of Eid.

Eid is a religious holiday celebrated by Muslims all over the world to mark the end of Ramadan, the Islamic holy month of fasting.

The Rapid Support Forces are a paramilitary organisation operated by the Sudanese Government, mainly comprised of the Janjaweed Militia who have been accused of genocide in the past.

Over the last few months there has been a violent military crackdown on civilian protesters in Sudan with reports that the RSF/Janjaweed have been responsible for killing up to 500 people and injuring 723.

To add to this, the RSF/Janjaweed has been accused of being responsible for over 1000 missing people, arresting 650 people and raping 54 people.

If these horrifying figures weren’t enough it is alleged that 118 bodies have been dumped into the River Nile.

The recipients of this gruesome military aggression mostly tend to be unarmed civilian protesters.

The group ‘Solidarity with Sudan Galway’ staged a protest to raise awareness about the ongoing fight for democracy in the Sudan and to draw attention to the appalling actions of the military.

They claim it is crucial they provide a voice for the Sudanese people since the government has shut down internet services.

Speaking to Galway Daily, event organiser Rema Hamid outlined her determination to stand in solidarity with the people of Sudan.

She described the Sudanese people as having faced “violence and tyranny that knows no mercy”.

Over the last few months the civilian demonstrators have come into direct conflict with Sudan’s Traditional Military Council (TMC) over the transition to civilian rule.

This transition to civilian rule comes as a result of President Omar al Bashir being overthrown in April after a brutal 30 year long reign over the Country.

The TMC has promised to hold democratic elections in 9 months time but the demonstrators fear this isn’t enough time to secure a fair election and to dismantle Bashir’s political network within the government.

The civilian protesters ultimately want to see the TMC remove themselves in favor of a civilian led transitional government where free and fair elections can be held.

Social Democrats Councillor Owen Hanley made his presence felt at the solidarity protest in Eyre Square.

The city cllr declared that the people of Sudan “need to see political pressure until their civic and human rights are vindicated”.

Expressing his support for the Sudanese people, Councillor Hanley affirmed that “Galway stands as it always does in full solidarity with the victims of oppression”.

Former Sinn Féin cllr and trade union representative Mark Lohan emphasised the importance that “Galway stands with those being persecuted in the Sudan”.

He added that “our solidarity protest today calls for an end to the massacres and intervention by democracies to challenge the military regime in Sudan”.