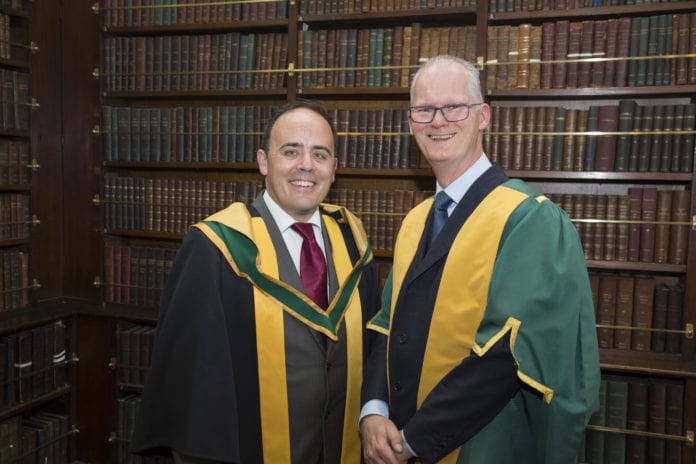 Patrick Lonergan, Professor of Drama and Theatre Studies at NUI Galway, has been elected as a Member of the Royal Irish Academy for his contribution to Humanities and Social Sciences.

Professor Lonergan was one of 28 new Members of the Royal Irish Academy elected for their exceptional contribution to the sciences, humanities and social sciences as well as to public service.

Professor Peter Kennedy, President of the Royal Irish Academy, said: “We should be proud of these new Members of the Academy for the honour their work brings to this country and the impact of this research on the quality of the higher education provided by our universities.”

Professor Patrick Lonergan is one of Ireland’s foremost theatre scholars and Professor of Drama and Theatre Studies at NUI Galway.

He is academic leader of the digitisation of the archives from the Abbey and Gate Theatres, the world’s largest multi-media digital theatre archive collection, making possible a new era in Irish theatre scholarship, which is digitised at the James Hardiman Library in NUI Galway.

Professor Lonergan is the author of several books on Irish theatre including the award-winning Theatre and Globalization (winner of the Theatre Book Prize UK in 2008), The Theatre and Films of Martin McDonagh (2012), and Theatre and Social Media (2015). In 2019 his History of Irish Theatre since 1950 will be published by Bloomsbury. He is a board member of Galway International Arts Festival and Galway Music Residency, and has lectured on Irish theatre at many venues internationally including Princeton, Florence, Florianapolis (Brazil), Wroclaw, and Tokyo.

The Royal Irish Academy is Ireland’s leading body of experts in the sciences and humanities. The Academy has been honouring Ireland’s leading contributors to the world of learning since its establishment in 1785. Past Members have included Maria Edgeworth, a pioneer of the modern novel and Nobel laureates: WB Yeats; Ernest Walton, Erwin Schrödinger and Seamus Heaney.