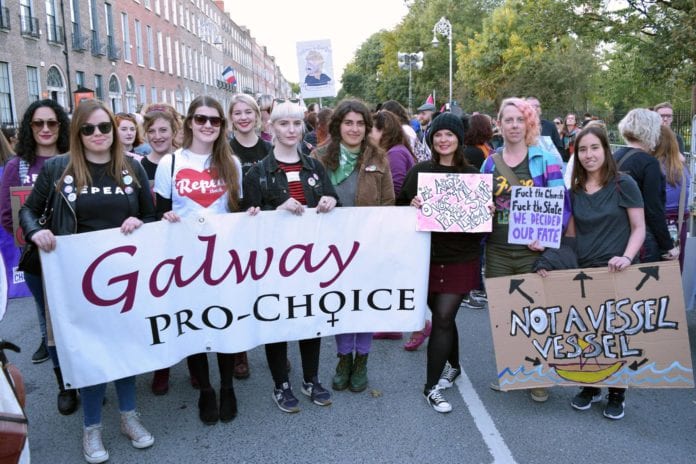 Today Galway Pro-Choice took a stand against a Dublin anti-choice group after they contacted the mobile of a woman who had recently undergone a medical (non-surgical) abortion.

The anonymous woman described in a post to a Facebook group how a few days after the procedure she received a call from an unrecognized number.

A man at the other end told her to come in for a follow-up scan and texted her the address in an attempt to draw her to the premises.

“He gave me my name my address and told me to come in on Monday”, she said in the post.

Galway Pro-Choice stated: “Anti-choicers somehow got the number of a woman who had had a legal abortion and tried to lure her to their premises (the number they texted her from is the fake My Options number).

“She reported it to the Gardai and was simply told to block the number.”

The group added “This is a horrifying breach of privacy. What were they going to do to her?”

The woman described being ‘scared’ after the incident.

She became suspicious after the call, saying it seemed ‘weird’ since she was told no further scans would be needed.

After ringing her hospital she quickly realised the man was not involved in her healthcare at all.

In her post, she described ringing the man back – and how he shouted abuse at her, calling her ‘disgusting’.

She has no idea who he is or how he got her details.

The intrusive action – widely condemned as a breach of medical privacy and data protection laws – has caught the attention of a nation still reeling from last year’s historic referendum.

Abortion is still a sensitive issue, with disagreements over exactly how to enact new legislation to legalise the procedure.

Meanwhile anti-choice groups are attempting to trick people in order to obstruct services.

Fake abortion service providers with confusing names like ‘My Options’ are being set up by anti-choice groups to prevent women from getting abortions.

These and other tactics are widely reported in outlets even outside Ireland.

The text sent to the woman gave the Dublin address 9 Berkeley Street, which is the listed address of a fake medical provider called ‘British Pregnancy Services’.

The woman noted that she was posting her experience on Facebook because she wants girls to be aware that this could happen to them.