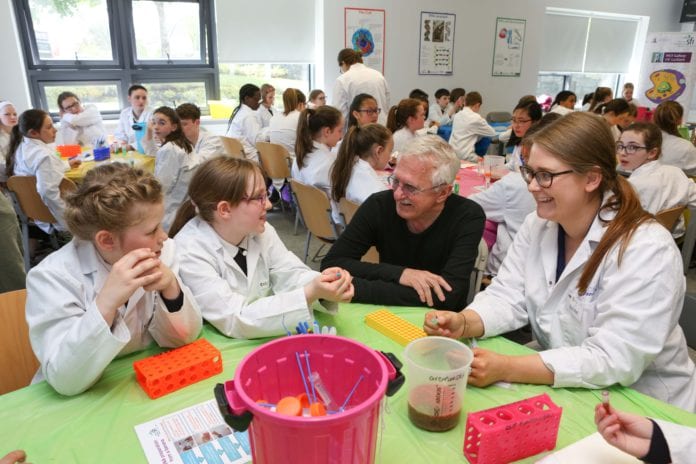 The students from Scoil Mhuire Clarinbridge and Presentation Primary School Tuam, were on campus as part of the University’s Cell EXPLORERS programme.

Based in the School of Natural Sciences at NUI Galway, Cell EXPLORERS is a science education and outreach programme directed by Dr Muriel Grenon and funded by Science Foundation Ireland.

The programme aims to involve, inform and inspire the young people about modern biology through a variety of hands-on activities.

Guided by teams of local scientists either studying or researching at NUI Galway, the children were introduced to cells and DNA, the work that scientists do, built DNA models and extracted DNA from bananas!

Professor Paul Modrich received the Nobel Prize for Chemistry in 2015, jointly with two other scientists, for his work on the mechanisms that cells use to repair DNA, and agreed to meet the Cell EXPLORERS team and the young Galway scientists as part of his visit to NUI Galway.

Professor Robert Lahue, Principal Investigator at the Centre for Chromosome Biology, researching DNA repair and links to human neurological disease, was also in attendance and worked with Professor Modrich when he completed his postdoctorate fellowship in his laboratory in Duke University Medical Center.

During his visit Professor Modrich joined the young scientists at the final steps in their DNA extraction experiment and took part in a ‘Questions and Answers’ session.

Professor Modrich said: “Meeting with the young Cell EXPLORERS and their teachers was a highlight of my visit to Galway. The students were isolating DNA from bananas, and their interest and enjoyment was obvious, and I was extremely impressed by their level of maturity. Dr Grenon and her colleagues are doing a magnificent job with this programme.”

Principal of Scoil Mhuire, Clarinbridge, Seán Holian, said: “The Cell EXPLORERS team expertly introduced the topic of DNA and various scientific terminology to our pupils and proceeded to work with small groups in hands on activities.

“The pupils greatly enjoyed extracting the DNA from bananas and indeed taking it home to enlighten their families. It was an absolute privilege to meet with the 2015 Nobel Prize Winner in Chemistry, Paul Modrich who had just stepped off the plane from the US.

“He has had a particular interest in DNA exploration also. A very special day, meticulously organised and expertly delivered.”

Alma Devane from Presentation Primary School said: “The children loved the hands-on opportunity to act like scientists.  Having the chance to meet scientists and see they were ordinary people like themselves has definitely sparked an interest in the girls. Listening and talking to Paul Modrich was a once in a lifetime opportunity.”