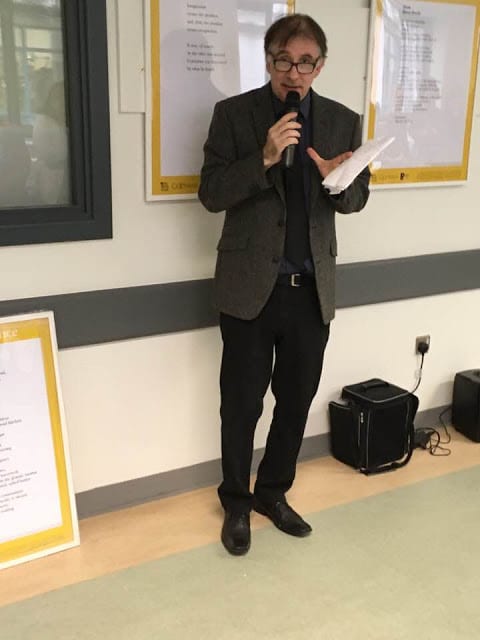 Kevin Higgins is well known poet around Galway who’s made a long habit of poking fun at the British Labour Party, of which he is a member.

Having lived in the UK in the 80s and 90s, the centrists who came to power in Labour in that time have long been a target of the biting poet, including a satire of Tony Blair.

But Kevin Higgins‘ latest piece of satire, a poem titled ‘Listening Exercise’  aimed at the Shadow Chancellor John McDonnell evidently caused quite the reaction, getting pulled from publication on the socialist British newspaper the Morning Star after getting the attention of Labour figures in the shadow cabinets.

Labour has been mired in a series of scandals lately, with accusations of deep-rooted anti-semitism in the party, as well seven MPs quitting to form The Independent Group in protest of how Labour is handling both this, and Brexit.

In the aftermath of this the Shadow Chancellor John McDonnell embarked on a “listening exercise” to hear complaints from within the party that’s been the subject of some derision, which prompted Higgins to respond in his way.

The poet’s take was published on Broadsheet.ie and on culturematters.org.uk, but was pulled from from online publication in the Morning Star and never made it into the print addition, apparently after pressure from Labour.

In an email explaining the decision to Mr Higgin, Ben Chacko, editor of the Morning Star said “I’m afraid I’ve pulled this poem because things are on a knife-edge in the shadow cabinet and at the moment our friends there advise exacerbating divisions would make things worse.”

He added that he appreciates everything Kevin has written for them, “but the sensitivities right now mean publishing it in the Morning Star would in our view feed the divisions that the right are trying to exploit.”

In a response to the incident Mr Higgins said, “It is great to know that my poems are being read by member’s of Jeremy Corbyn’s Shadow Cabinet.”

The poet added that it was meant as “friendly advice for Shadow Chancellor John McDonnell, albeit that it is satirically delivered, as is my way.”

I understand the pressures people are under at the moment, and am in no way angry at the editors of The Morning Star for the action they felt they had to take here,” he added.

“I plan to continue published poems in The Morning Star, as I have since they asked me for my satire on Tony Blair in 2015.”

When you paint hatred on my garden wall

and front door, I will read your words

When you try to burn my house down

I will listen to what the flames are saying.

Every lie you tell against me

by earnestly, and in detail, answering your questions

about it over and over again.

When you burst through my living room door

with a chainsaw intended for me,

I’ll pour you a nice cup of tea

and say: let’s talk about this.

When the tumours come for me

I’ll know their opinion must be taken

And when the beetles and bacilli

begin to consume me,

their point of view.