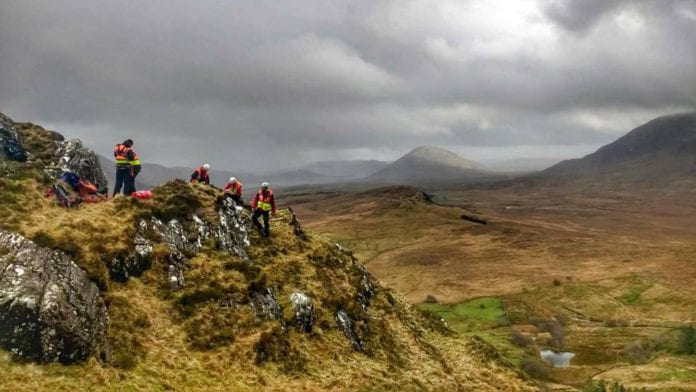 Galway Mountain Rescue hasn’t been called out to an emergency for two months in a row after people took to heart a plea from the voluntary service not to endanger emergency responders by staying out of the mountains for the duration of the current crisis.

Back in late March Galway Mountain Rescue warned people to avoid walking in the mountains of Galway during the Covid-19 pandemic, as there would be reduced rescue services available in order to protect their volunteers.

Warnings that only people seriously injured or otherwise trapped would have GMR volunteers dispatched have clearly had an effect, as not a single emergency response was needed for all of April, after a similarly quiet March.

“At the beginning of April, we reported that we did not have to respond to a single emergency incident throughout the month of March,” a post on the Galway Mountain Rescue facebook page from May 7 stated.

“Thanks to everyone’s continued adherence to the Government’s public safety guidelines, we are delighted to announce that our boots have remained mud-free for a second consecutive month!”

Remaining ready to respond to emergency situations while obeying the HSE’s distancing restrictions has required a “huge effort” from their volunteers.

Unable to meet up in person, rescue team members have taken to running virtual training sessions on skills from Search Management to Navigation in order to keep themselves in readiness.

This, along with a purchase of vital PPE, has allowed them to remain ready to be called out 24/7.

“Unfortunately, the public health emergency is not over and the risk remains as high now as it has ever been.”

“We still need your cooperation/ influence to ensure that those tempted to venture out hold off until it is safe to do so.”

At the beginning of April, we reported that we did not have to respond to a single emergency incident throughout the…

Posted by Galway Mountain Rescue Team on Thursday, May 7, 2020

Galway Mountain Rescue’s plea for people to stay out of the mountains to avoid potentially passing on the coronavirus to their volunteers mirrors a call made by the RNLI and Irish Coast Guard.

These two groups have made, and since renewed, a joint appeal for people not to use the sea for recreation or exercise during the Covid-19 crisis in order to keep responders safe.