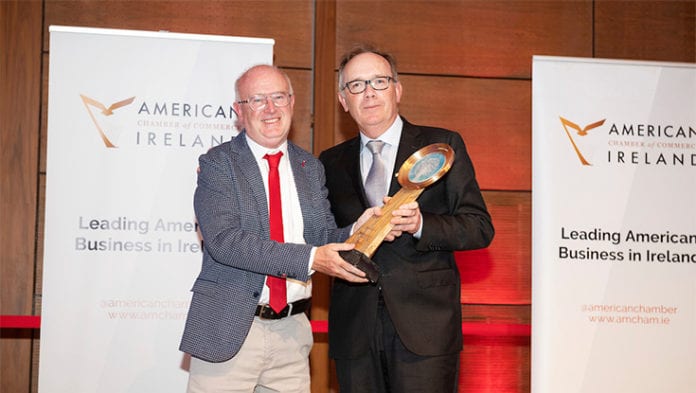 Brendam Smith of the Insight Centre at NUI Galway was honoured with the Cairdeas Award this week for his extraordinary contributions to young people in the west of Ireland.

As Education and Engagement Officer with the SFI Insight Centre for Data Analytics, Brendan has spent years helping young people and minorities in the West of Ireland to develop skills in technology, coding and science.

He received the Cairdeas Award recognising this at the inaugural American Chamber of Commerce West Northwest US Ireland Business Conference held at NUIG this week.

Brendan said that he was “deeply honoured” to accept this award as recognition of how Insight, NUIG, and the Chamber of Commerce do with the community.

He highlighted the importance of “engaging with and empowering individuals and communities from all backgrounds, ages, traditions and across all regions, both in Ireland and across the world, in developing creative skills in and an awareness of science, technology, engineering and maths.”

He added that he was “a small part of a new wider collaborative movement that wants to enable people to use STEM and scientific research to improve their quality of life and to solve the increasing problems caused by Climate Chaos.”

Mark Gantly, President of the American Chamber, congratulated Brendan for his “outstanding community impact” in the west-northwest region.

The West Northwest Conference this addressed how innovation and collaboration among businesses in the west of Ireland can be expanded on.

There was a strong focus on furthering Foreign Direct Investment’s collaboration in the region with SMEs, local government and the opportunity to innovative with third level institutions.

A highlight of the conference day was the second annual US-Ireland Business Series lecture given by James Lyons, VP Operations at Boston Scientific.

President of NUIG, Prof Ciarán Ó hÓgartaigh said the university was delighted to host the American Chamber’s gathering of FDI leaders in the region.

He added that the university was especially pleased to see Brendan honoured for his long standing work.