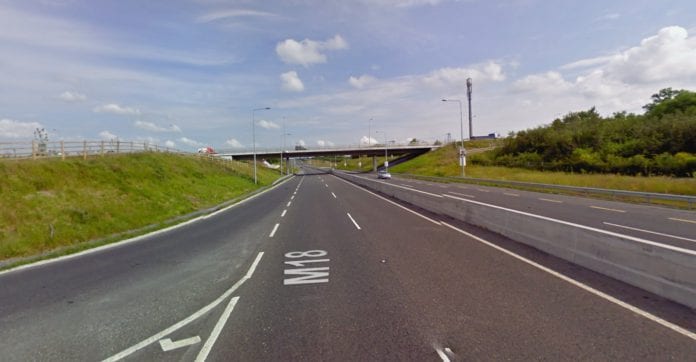 A Galway man has been jailed for eight months for nearly causing a terrible crash on the M18 while he was high on heroin.

Ennis District Court that a woman had to brake hard to avoid a collision when Keith Morkan (48) of St. Brendan’s road, Woodquay swerved across the road and clipped her mirror on December 29, 2017.

The Irish Times reports that Sgt Brian O’Callaghan told the court that Mr Morkan came onto the motorway at Knockanean outside Ennis driving the worst car he’d ever seen on the road.

He was on patrol on the M18 with a colleague when they saw the heroin addict’s car enter the motorway and nearly cause an accident.

According to the Sergeant, the back and side windows of the car were smashed, and the back right wheel had no tyre.

They pursued Mr Morkan while he drove erratically, and after a short period he pulled over and came to a halt.

Mr Morkan, who has eight previous convictions, was disqualified from driving at the time this incident occurred.

Sgt O’Callghan said that Mr Morkan was unsteady on his feet at the roadside, and tested positive for opiates.

Solicitor for the defence Daragh Hassett said of Mr Morkan’s addiction “heroin nearly killed him”, but that he was now free of drugs.

But judge Patrick Durcan said that he had shown disregard for the rules of the road, and for the court which barred him from driving, the Times reports.

Were it not for the quick action of the woman involved, she could have been in a terrible accident, he added.

Morkan pleaded guilty to multiple offences, and judge Durcan sentenced him to eight months in prison.