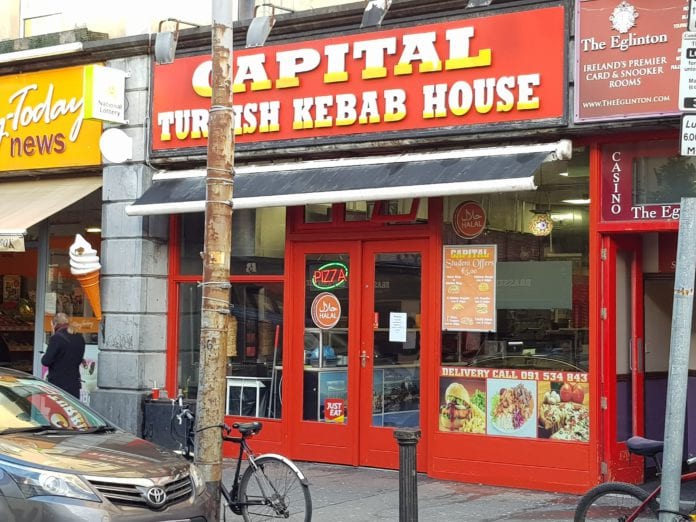 One Galway restaurant was served with a Closure Order in November in record breaking enforcement month for the FSAI.

Capital Kebab on Eglinton Street was served with a closure order under the EC (Official Control of Foodstuffs) Regulations for deficiencies in its food safety protocols.

The order was issued by the Food Safety Authority of Ireland on November 28, and lifted eight days later on December 6.

Three issues were raised during an inspection carried out by an officer of the Health Service Executive.

The report noted that there was a failure to put in place and implement a food safety management system based on HACCP principles.

In particular it was highlighted that there was no adequate procedures related to the manufacture, storage, cooking and handling of chicken and lamb kebab, posing a health and safety risk.

The inspector also noted that staff handling food and those responsible for implementing safety protocols did not demonstrate competency in food safety.

The final issue raised in this report was that “Temperatures taken of high risk foods during the inspection demonstrated that the cold chain was not being adequately maintained”.

This raised a serious risk of “microbial growth and a hazard to foodstuffs”, the inspector noted.

Capital Turkish Kebab House was one of 23 businesses served with an Enforcement Order by the FSAI in November, the highest ever in a single month.

Other reasons businesses around Ireland were given a closure order last month include the presence of rats, cockroaches, spiders, and other insects in proximity to food.

“Some of the reasons for Enforcement Orders in November demonstrate totally inadequate hygiene standards and these operators are damaging the reputation of the food industry as we enter one of the busiest months of the year.