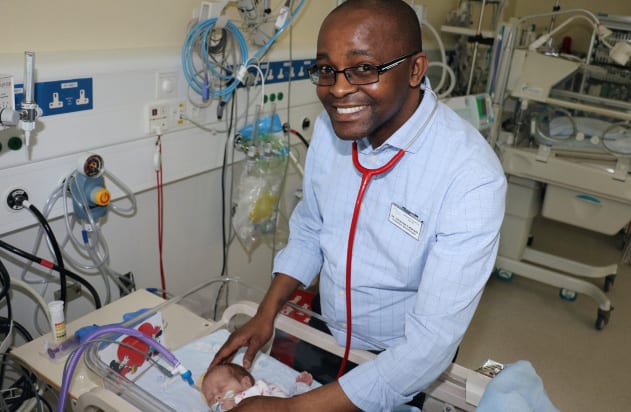 Galway University Hospitals are building on their paediatric services with the appointment of Dr Johannes Buca Letshwiti as a Consultant Neonatologist.

Dr Letshwiti graduated from NUI Galway in 2005 and went on to do medical and surgical internships in Roscommon and Galway until 2006 with a view towards specialising in paediatric care.

During that he was honoured with the Audrey Tan-Dy Humanitarian Award for outstanding patient care.

He returned to Ireland in 2016 and has been working at the Rotunda Hospital in Dublin and Mayo University Hospital until January of this year.

Commenting on his appointment Dr Letshwiti said he he has a special interest in quality improvement projects and neonatal haemodynamics.

“I’m excited about the prospect of expanding the neonatal services in the West of Ireland and I’m looking forward to being part of the team leading on this field within the Saolta Group,” he added.

Chris Kane, General Manager of GUH, said the were delighted to welcome Dr Letshwiti onto their neonatal team, and that his work will “support the future development of this service to include caring for the very premature babies born throughout the Saolta Group.”

Roughly 15 percent of children born in Galway’s hospitals have to spend some time in the neonatal unit according to Mr Kane.

“We have a very busy maternity unit and the neonatologists are responsible for the care of all newborn babies who need extra support after birth.”