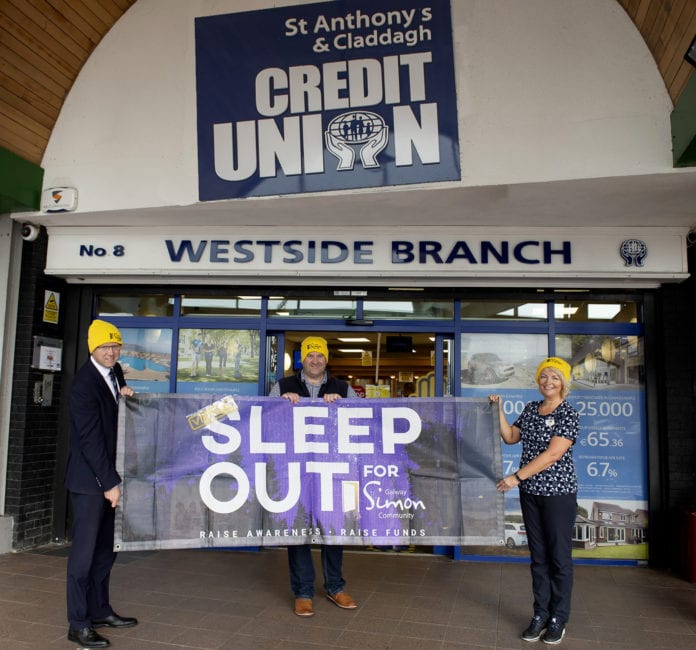 Credit Union members in Galway are set to take part in Sleeping Out for Simon – an event which is going virtual this year.

St. Anthony’s & Claddagh Credit Union along with St Jarlath’s Credit Union have called on their members to get involved by swapping their beds for sleeping bags for one night in support of those facing homelessness.

St. Anthony’s & Claddagh Credit Union has supported Galway Simon Community for over four years, and has taken part in the annual Sleep Out event since 2017.

In their first year, they took part as a team outside their Mainguard St. branch.

For those taking part this year, Galway Simon Community have an eventful evening lined up which will be live-streamed on the night, including music, a virtual quiz, storytelling and mindfulness.

This will allow those taking part across the county to keep connected from a distance, whilst they spend the night fundraising online in a unique and powerful way.

“As a Credit Union we are delighted to be involved with Galway Simon again this year. From day one we have been involved in the annual Sleep Out.

John Doyle, CEO of St. Jarlath’s Credit Union said they are delighted to be taking part this year as a team with those in St Anthony’s Credit Union.

“It’s a great fundraising event for such a worthy cause,” John said.

Funds raised through Virtual Sleep Out for Simon are more important now than ever. Galway Simon urgently need the support of the community to stand with them to make sure that they can be there for those who need their help in the challenging times ahead.