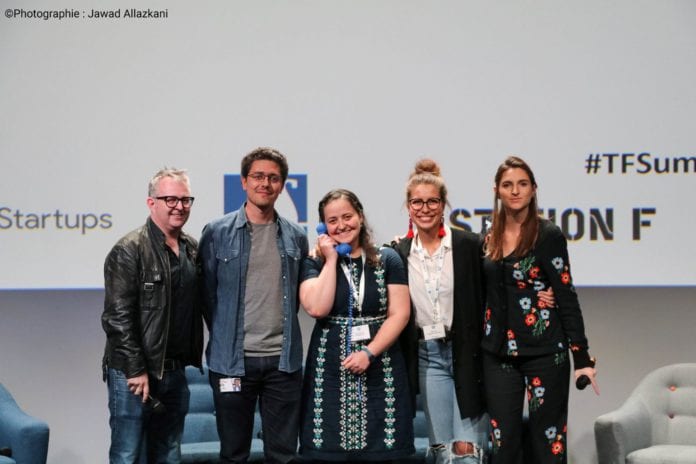 A student at NUI Galway was one of five winners at the prestigious Techfugees Global Challenge competition.

Suad Al Darra, an MSc student in Computer Science in the College of Engineering and Informatics at the University, won the award for her
‘Refugees Are’ project.

Refugees Are is a platform designed to analyse negative narratives published globally about refugees.

The competitions project applications went through an international Jury of experts who selected 25 finalists from hundreds of applications, from 52 countries across the world.

The projects were then pitched in front of an international Jury at the Techfugees Summit in Paris, which was opened by former Prime Minister of Greece and current Councillor at the World Refugee Council, George Papandreou. Suad’s project was one of five final winners.

Suad Al Darra graduated as a Software Engineer from Damascus University in 2008 and worked for several international companies.

She and her husband moved to Ireland in 2014 escaping the conflict in Syria and looking for a better future.

She worked at Fujitsu laboratories at the Insight Centre for Data Analytics for two years as a Research Engineer and after that worked for UNICEF, analysing non-traditional sources of data and applying data science methodologies to incubate and develop data-driven prototypes that support emergency response.

In 2017, Suad enrolled as a part-time student to the MSc in Computer Science (Data Analytics) within the College of Engineering and Informatics at NUI Galway, and also became a mother during that time.

Stemming from her own personal displacement journey, Suad discovered the power of big data during her studies and entered her project in the Techfugees competition.

Conor Hayes, Programme Director of the MSc in Data Analytics at NUI Galway, said: “Suad fashioned an award-winning data analytics project on a subject that is hugely relevant to the experiences of her own family and to the many other displaced families and people in the world.

“We are very proud of her and delighted that she could achieve this while a student at NUI Galway.”

Speaking about her winning project Suad Al Darra, said: “The ‘Refugees Are’ project engages the public in classifying their news as ‘negative’ or ‘positive’ to raise more awareness in the language used by journalists and politicians when describing refugees and migrants.

“The goal is to tackle the problem of Xenophobia against refugees created by the media, which is negatively affecting their hope of integrating and starting a new beginning.

“I was curious to explore the messages found in the news and create an overview of it.

“I decided to explore the news using GDELT (Global Dataset of Emotions, Language, Tone), the biggest open source collection of news articles with high frequency and in over 100 languages. GDELT has been used previously in measuring refugee flows in Europe depending on media citation.”

Suad added: “This dashboard may potentially help organisations like UNICEF explore locations of countries with negative stories in their media, in order to better target the problem of Xenophobia with customised local campaigns or media training.

“It can also be useful to spread awareness and empathy towards migrants and refugees by allowing the public to participate in classifying the news as positive, negative or neutral and giving them the chance to understand refugees’ daily struggles and challenges.

“The next step is to add more daily news and to automate the process to make it a real-time dashboard plugged in directly to GDELT news.”