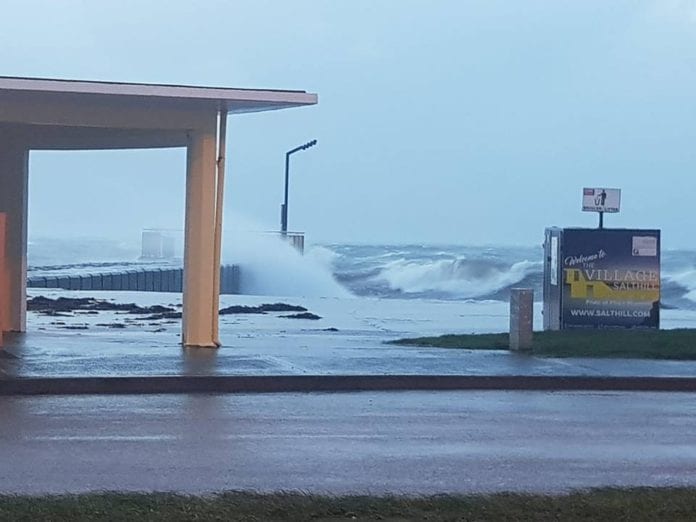 Galway City Council has announced a range of precautionary measures being taken to safeguard against flooding and other issues as Storm Lorenzo approaches.

The city council weather response team met all afternoon after Met Eireann issued a Status Orange weather warning for the west and multiple other weather warnings before Storm Lorenzo hits on Thursday.

The Status Orange warning for heavy wind in Galway will be in effect from 6pm on Thursday until 3am on Friday.

Constant winds of 80km/hr are expected with gusts of up to 130km/hr, possibly higher in coastal regions.

Heavy rainfall of more than 50mm has also been forecast for the west which, combined with high winds, means there is likely to be flooding in coastal areas.

The city council is also advising people to be aware of fallen trees. “In early October, trees are mostly in full leaf with a large surface area, so even moderate strength winds can bring down weakened trees and/or tree limbs.

“In addition, some trees may be compromised due to saturated soils at the moment, and with more rain forecast with Storm Lorenzo some disruption due to falling trees/branches is likely.”

A number of roads around Salthill where flooding is expected from heavy rain and storm surges will be closed on Thursday for the duration of the Orange weather warning.

Both Salthill, and the Seapoint Promenade (from Grattan Road to Blackrock) will be closed  from 5:00pm Thursday and further road closures may be announced as the situation develops.

Seapoint and Toft Park car parks will also be closed from 1.00pm Thursday and all vehicle owners are urged to move their vehicles.

A tow truck will be on hand to remove any vehicles still present once the warning comes into force. People moving their cars should avoid leaving them at the waterfront.

Sandbags can also be collected from now for people who feel that their homes or businesses are at risk of flooding from three locations: Claddagh Hall, Mutton Island Treatment Centre, the former tourist office adjacent to the Atlantaquarium.

People who collect sandbags are being advised by the city council to hold onto them after Storm Lorenzo for the duration of the winter season.

A flood barrier has also been erected at the Spanish Arch for the duration of the storm.

The city council is working with emergency service providers to ensure that emergency accommodation is provided at locations including Fairgreen & Osterley Lodge.

The COPE Galway Day Centre will remain open all day Thursday and operate throughout the night.  Their contact number is 086 8355063.

Business owners and homeowners are advised to check their own drains and secure any loose objects within their property in advance of the warning taking effect.

People are advised to stay indoors for the duration of the storm warning, and if you must travel, exercise extreme caution.