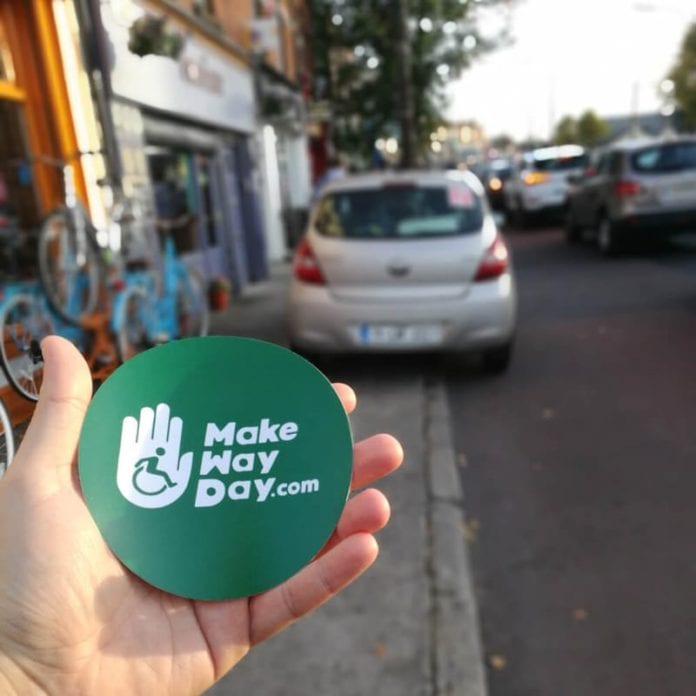 The annual Make Way Day is taking place on September 26 in Galway city and elsewhere to promote the needs of disabled people in public spaces.

The Make Way Day campaign is led by the Disability Federation of Ireland and brings together a wide range of local voluntary groups and government bodies.

Some of the other groups behind the campaign are the Irish Wheelchair Association, Fighting Blindness, Enable Ireland, Arthritis Ireland, Multiple Sclerosis Ireland along with many others.

It is about promoting awareness of the needs of people with a disability in public spaces, where a minor issue for a fully able person can be a severe obstacle in the path of a person with a disability.

The greatest impediments being highlighted by the campaign are: cars parked on footpaths, bicycles illegally parked, and bins left on footpaths.

A big part of the day is taking and sharing photos and videos of these kinds of obstacles with the hashtag #MakeWayDay or #MakeWayDayGalway.

Last year saw over 1,000,000 people reached by the campaign on social media, and so far it has the support of 19 local authorities.

This year Mayor of Galway Mike Cubbard will launch Make Way Day in Galway city with a coffee morning at the City Museum.

Following the launch there will be a meet and greet between local businesses, people with a disability, agencies and those with an interest in Accessibility in Galway City.

Galway City Council unanimously gave its backing to the campaign last year and called on the Taoiseach to create and financially support a a national Make Way Day in September.