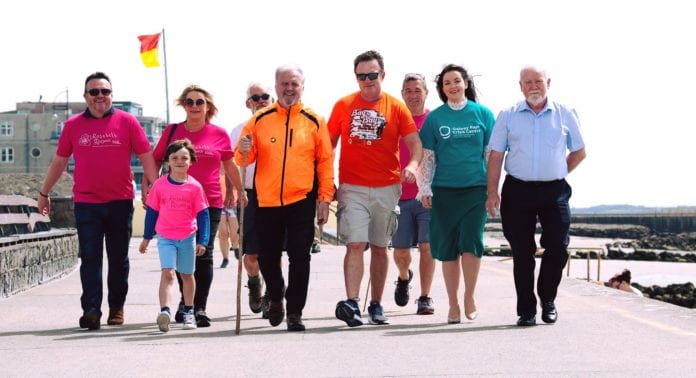 Former Operation Transformation Leader Ronan Scully is set to undertake a week-long 350km ‘Irish camino’ this Saturday, to raise funds to help children and young people in Ireland and Africa.

Beginning in Co. Waterford on Saturday, 17 August, the walk will conclude with a 5k charity walk on the promenade in Salthill, on Saturday 24 August at 4pm.

The long-distance walk comes as Ronan celebrates 30 years of working for a variety of charities in the developing world, including his current employer, Self Help Africa.

Having worked for a number of years with Mother Teresa’s Missionaries of Charity in Calcutta, Ronan  then spent more than a decade in India, Nepal, Angola, Ethiopia, Kenya and Sierra Leone, and continues this work as a representative in the West of Ireland with Self Help Africa.

The walk will include a detour through his birthplace in Co. Offaly where he hopes to get several friends to join in for part of the marathon undertaking.

Ronan will be joined at different stages of the walk by family, friends and supporters, on his journey.

“We have a number of social events and gatherings arranged along the route, and there will be various sports people and others joining me at different stages of the trip,” explained Ronan.

“I am looking at it as a prayerful journey and a celebration – of my own milestone, the time that I’ve spent working for charity, and also of the many incredible people who I’ve crossed paths with in this line of work over the past 27 years and who gave so much of themselves so that we could help so many people, families and children in need around our world.”

“The Irish people are amongst the most generous people in the world. I feel very blessed, privileged and humbled to be able to do what I do, and to know that so many people have been willing to give their time, their hard earned money and their efforts to support a host of good causes.”

People are welcome to register at the Claddagh Hall in Galway for the Salthill Prom walk and make a donation at 4pm on Saturday the 24th of August and join Ronan or the last 5km of his walk.