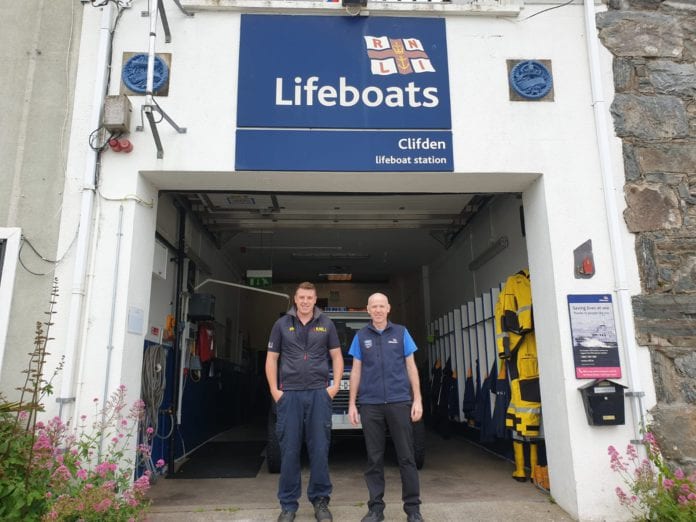 Rob King, the former full-time mechanic for Clifden lifeboat station has been appointed as the RNLI’s Area Lifesaving Manager for the West of Ireland.

Rob King was full-time station mechanic in Clifden RNLI for five years. His former role has been filled by a volunteer from the lifeboat crew, Thomas Davis.

In his role of Area Lifesaving Manager, Rob will be leading a team of staff and volunteers while managing the safe, efficient and effective delivery of the RNLI’s lifesaving services on the West coast of Ireland.

Speaking about his new role Rob said that he was delighted with his appointment that he “looks forward to working alongside our crews, volunteers and staff to achieve the RNLI’s aim to save lives at sea.”

“I started out in Clifden as a volunteer in 2007. I then became the station mechanic with the arrival of the all-weather Mersey Class Lifeboat in 2014.”

“I’m very proud of Clifden Lifeboat Station and enjoyed the years I spent there and I’m pleased to be handing over the reins to crew member, Thomas as station mechanic.”

“As Area Lifesaving Manager I hope to be of assistance to him and the crew, especially with the arrival of the Shannon class lifeboat to Clifden.”

As station mechanic it will be Thomas’ responsibility to ensure that the station’s lifeboat and her life-saving equipment are kept in top condition and are ready to answer the next emergency call.

Thomas said that he is “delighted to be taking over from Rob as station mechanic for Clifden.”

“It’s an exciting time as we have recently become the first station on the West coast to receive a new Shannon-class lifeboat. We will miss Rob and wish him the best of luck in his appointment.”