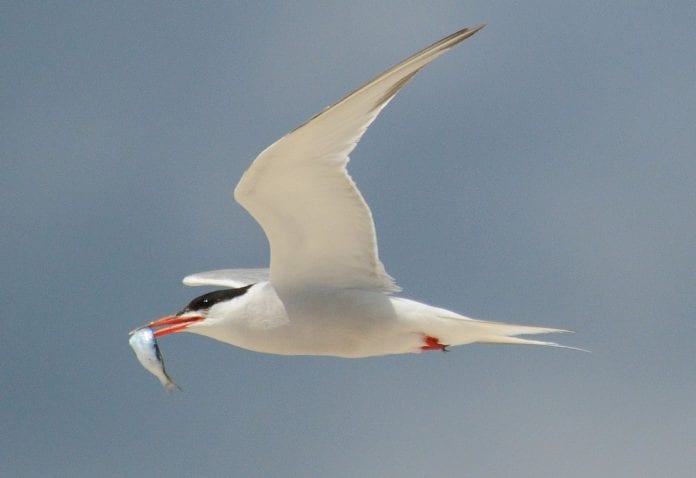 For the first time, a Common Tern chick has taken flight from a floating raft in Galway, Conservation Volunteers Galway has announced.

Most of the Common Tern nests on Mutton Island and Rabbit Island in Galway Bay are predated each year by a variety of predators.

This has resulted in very few Common Tern chicks surviving long enough to take to the air.

Protecting the nests on these islands from predators is very difficult. One solution is a floating raft which can be seen moored in Lough Atalia.

This solution has been successful in Lough Neagh and in Dublin Bay.

With funding from GMIT Marine & Freshwater Research Centre and GMIT Green Campus, a floating raft with poly-carbonate sides was constructed by Conservation Volunteers Galway and put in place in April.

Up to eight pairs of Common Terns were observed by Niall Keogh, a PhD student at GMIT, to make  nests on the raft beginning in mid-May.

For reasons unknown many of the nests were abandoned, possibly due to a period of very strong winds and inclement weather.

Chicks hatched from three nests from which one chick survived and took flight on 12 August. Based on learnings from this year, modifications will be made to the raft and it will be put in place again next year.

If funding can be obtained to do so, a second raft will be added as Common Terns are better protected from airborne predators if they can nest together in large colonies.