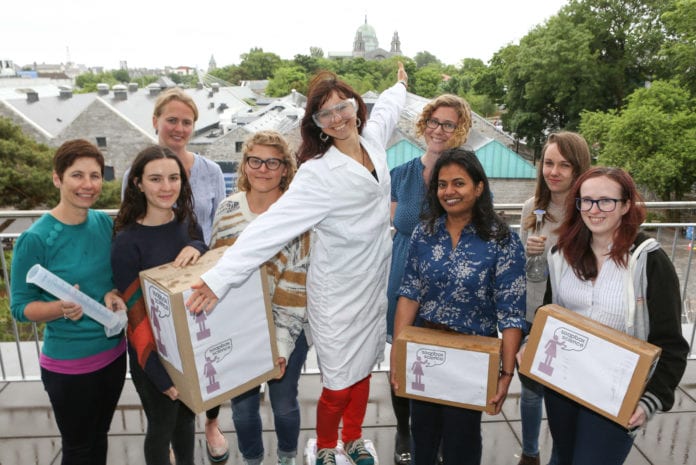 TWELVE female scientists will take to their soap boxes and bring science to the streets of Galway as part of NUI Galway’s second annual Soapbox Science Galway.

The event will take place from 11am – 2pm at the Spanish Arch on Saturday, 7 July and is free and open to the public.

The scientists will be sharing their work in technology, science, medicine and engineering with the public and this year NUI Galway has joined forces with colleagues from GMIT and UCC to showcase research talent across the western seaboard.

This year’s talks will cover a diverse range of topics ranging from: microbial brains; how computers read fairy tales; octopuses and their ancient relatives; what kelp does for its community; and microplastics in the oceans.

Each scientist will speak numerous times on their soapbox throughout the event as Soapbox Science Galway challenges perceptions of what a scientist is by celebrating the diversity of women in science.

Soapbox Science Galway is organised by Dr Jessamyn Fairfield and Dr Dara Stanley from NUI Galway. Jessamyn is a nanoscientist and lecturer in the School of Physics and CÚRAM, and a comedian who runs monthly Bright Club research/comedy events across Ireland.

Jessamyn’s research is focused on building electronics like the brain. Dara is a scientist interested in ecology and biodiversity, and in particular in plants and the insects that pollinate them. She is a lecturer in Botany and Plant Science in the Ryan Institute.

Speaking about the event, Dr Dara Stanley from NUI Galway, said: “Soapbox Science is unusual in that it brings science directly to the streets. This means that anyone going about their daily business may meet a scientist, perhaps even for the first time.”

Dr Jessamyn Fairfield, from NUI Galway, said: “We’re excited to highlight some of the amazing women working in science and engineering from all around the west of Ireland and beyond.”

This is the second year Soapbox Science has come to Galway, which was founded in the UK seven years ago.

The event builds on the Galway tradition of public discourse from soapboxes, this time with a scientific twist, bringing the general public and scientists together, while also highlighting the work of our great female scientists in Ireland in a fun and friendly way.

It also aims to highlight the continued need for a skilled science and engineering workforce, where the scientific community needs to continue to attract the best talent in an open and inclusive way.