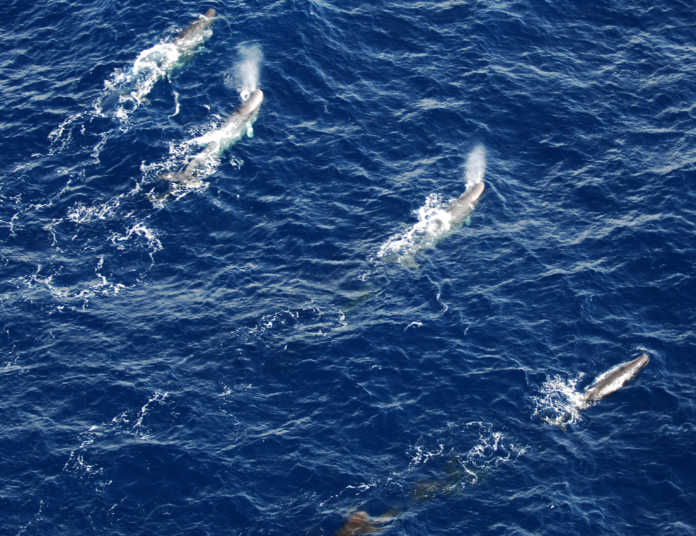 Sperm whales, one of the largest species of marine mammals in the world, live in abundance in the deep waters off the west coast of Ireland a study by GMIT has found.

The study, jointly carried out by GMIT and the Scotland-based Sea Mammal Research Unit Consulting (SMRU Consulting), relied on acoustic technology to count whale populations in a way that would not have been possible before.

The deep diving nature of sperm whales means that they are difficult to observe at sea at the best of times.

During a single dive, sperm whales can spend nearly an hour at depths in excess of 300m, with only short periods at the surface.

The research published recently in the Journal of Cetacean Research and Management was the result of six research voyages between May and October during 2015 and 2016.

The surveys aboard the Marine Institute’s RV Celtic Voyagerand the yacht Song of the Whale saw the research count, and even pinpoint the location of individual whales using an underwater microphone array.

“The survey team spent a total of 45 days at sea, covering an area of some 120,000 km2 in weather conditions that make the hardiest of seamen queasy,” said Dr Simon Berrow of GMIT.

“With high sea states and towering swell, the study relied purely on being able to detect the distinctive powerful click trains of sperm whales using a streamlined towed hydrophone array.”

The limited time sperm whales spend at the sea surface combined with the wild weather that prevailed throughout the surveys meant that they were lucky to be working with the hydrophone.

More than 70% of the time the team spent looking for whales was during 3m swells and strong winds, so that they only ended up visually sighting 11 animals.

The ability of hydrophones to record sperm whale vocalizations, however, is not impacted by weather and surveys can continue through the night 24/7.

Dr Berrow remarked that it’s amazing that they could accurately count the number of sperm whales in offshore Irish waters in spite of seeing just a few actual whales.

“This type of acoustic monitoring is a very powerful survey tool, especially in the wild Atlantic waters off the west coast of Ireland as we can survey during the day and night in high sea-states.”

“Each whale was pinpointed by comparing the exact time that each click arrived at each hydrophone in the array and then triangulating bearings from sequential clicks over extended encounters.”

Acoustic techniques provide an excellent method of monitoring sperm whales, and this first abundance estimate can be used as a baseline for Irish offshore waters.

Sperm whale populations are still thought to be recovering after years of over-exploitation. Clearly Ireland provides very good habitats for sperm whales, the largest toothed animals in the world’s oceans.