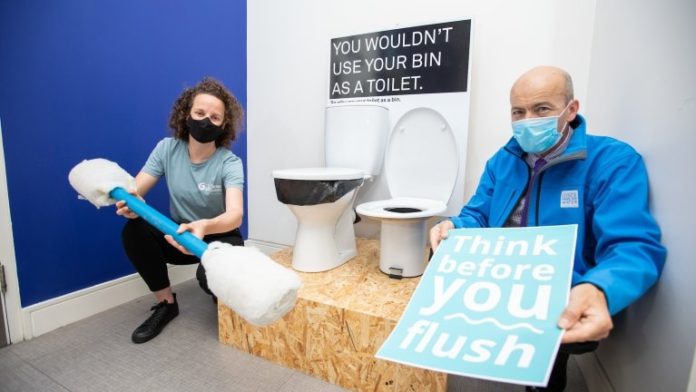 Over 100 tonnes of wet wipes and other sanitary items are removed from Mutton Island wastewater treatment every year as a result of people flushing items down the drain.

One in four people admitted that they regularly flush wet wipes and other sanitary items that clog drains and cause serious environmental issues an recent Irish Water survey found.

Irish Water says that thousands of sewer blockages have to be removed every month due to people flushing items that don’t belong down the drain.

Irish Water and Clean Coasts are urging the public to continue to ‘Think Before You Flush’ as a recent survey has revealed that almost a million adults living in Ireland regularly flush wet wipes and other sanitary items down the toilet.

“Removing blockages can be a nasty job, sometimes workers have to enter sewers to remove blockages with shovels,” said Tom Cuddy of Irish Water.

“Some blockages can be removed with jetting and suction equipment. I’ve seen pump blockages that workers have had to literally clear by hand in order to get the pumps up and running again in a race against time to avoid sewage overflows to the environment.”

A survey in 2018 showed that more than a third of people admitted to regularly flushing items down the toilet which they shouldn’t.

As a result on an ongoing awareness campaign in partnership with Clean Coasts, another survey by Irish Water this year showed that this had fallen to 24%.

Along with a risk of blocking sewers, and causing homes to flood, these items cause immense environmental damage when they make their way to rivers and coastlines, harming fish, birds, and their environments.

Sinead McCoy, of Clean Coasts said, “The Think Before You Flush campaign, through education and awareness, aims to prevent items like wipes, cotton bud sticks and sanitary items washing up on Ireland’s spectacular beaches.

“While we have seen a positive improvement in the nations flushing behaviour since 2018, one in four adults still admit to regularly flushing unsuitable items down the toilet.”

“By making small changes in our flushing behaviour, we can prevent the harm caused by sewage related litter in our marine environment. We are asking everybody to only flush the 3 P’s – pee, poo and paper, and put everything else in the bin.”