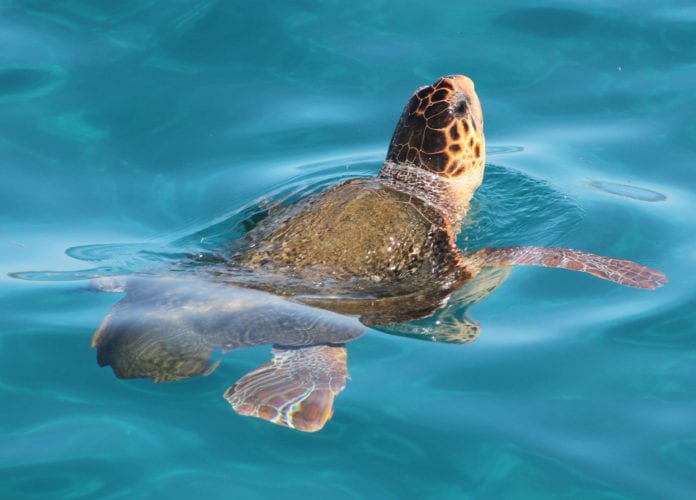 An endangered turtle carried from the Canary Islands to the beaches of Connemara by Atlantic storms is flying home commercial today.

The Irish Examiner reports that the Loggerhead turtle, affectionately known as Mara, was found in severe distress on Dolan’s Beach in Roundstone by local woman Linda Hederman.

The female turtle was brought by the concerned woman to Western Veterinary in Clifden where she was treated for hyothermia overnight before heading to Dingle Oceanworld to recuperate.

During the four hour flight Mara will be coated in vaseline to keep her hydrated the Examiner says, and kept in an aerated box.

On the flight accompanying her will be two staff from Dingle Oceanworld and vet Shónagh O’Sullivan who volunteered to make the trip to ensure her good health.

The Loggerhead Sea Turtle is the world’s largest species of hard-shelled turtle. Full grown adults average about 350kg in weight, and some specimens have been found up to 450kg.

They are found in the Atlantic, Pacific, and Mediterranean, but need warm water in order to survive which is what made Mara’s predicament so precarious.

The Loggerhead is considered an endangered species by the International Union for the Conservation of Nature, with the greatest threat to their survival being loss of nesting habitats to coastal development.

In poor health when initially found, Mara put on about a kilo in weight under the care of Dingle Oceanworld, and now weighs a healthy 3kg.

Before boarding her flight Mara needed a health certificate and her own specially issued passport to travel.

Upon arriving in the Canaries she will be brought directly to the Gran Canaria Turtle Hospital to get checked over before being released back into the water.