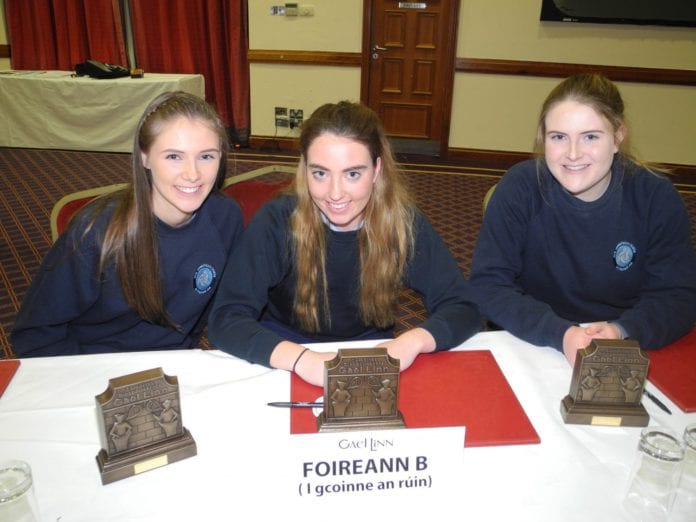 Three debate teams from Connemara schools are headed to the national finals of the Comórtas Díospóireachta Uí Chadhain competition.

Comórtas Díospóireachta Uí Chadhain is organised annually by Gael Linn, with funding from Foras na Gaeilge, as a debate competition for all-Irish schools with junior and senior debates.

The junior and senior teams from Scoil Chuimsitheach Chiaráin in Carraroe, as well as the senior team from Coláiste Chroí Mhuire in Spiddal qualified at the regional finals in Limerick last week.

At the regional finals in Limerick the three other teams involved in the junior debate were Pobalscoil Chorca Dhuibhne, Dingle, Coláiste An Phiarsaigh, Cork and Coláiste Chroí Mhuire, An Spidéal.

They debated the motion ‘ Léiríonn muid meas ar ainmhithe sa tír seo’ (We cherish our animals in this country).

The subject for debate in the senior section was ‘ Tá todhchaí gheal roimh an Aontas Eorpach’ (The European Union has a bright future), and needless to say there was plenty of talk about Brexit during the exchanges.

Both schools from Connemara,  An Spidéal and An Cheathrú Rua advanced to the finals having seen off the opposition from Pobalscoil Chorca Dhuibhne, Dingle and Coláiste Daibhéid, Cork.

They will now be preparing over the Christmas period for the All-Ireland final which will be held on January 22.

A location for the finals hasn’t been announced yet, but it is believed that Gael Linn are looking into the possibility of hosting the event in Galway for the first time ever.