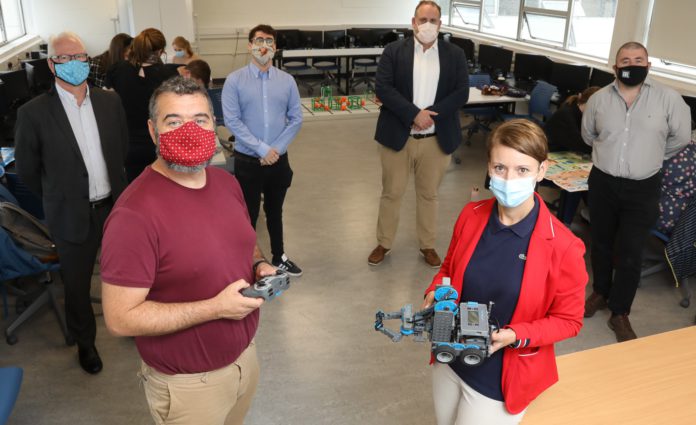 GMIT will see primary school children go head to head in a battle of robotics next year. Well, not actual robot wars, but competing in creating one of their own.

The west of Ireland regional heats in the centrepiece competition of the VEX Robotics Programme will take place at GMIT in the next academic year.

VEX Robotics is an exciting programme where school children and teenagers, aged 8 to 18 years, learn about Science, Technology, Engineering and Maths (STEM) while having fun.

Each year there is a new challenge where students must work as a team to design, build, programme and drive a robot.

The regional competition will take place in GMIT in January and promises to be a lot of fun. Winners of the heat will go on to represent the West of Ireland in the national competition in Cork.

Dr Carine Gachon, project coordinator at GMIT, said that they were “overwhelmed” by the amount of primary schools that sought to take part.

“Unfortunately, we could only accommodate 16, but in the future we hope to expand the competition to more primary schools and also include secondary schools.”

This week, primary school teachers were invited to the campus to get a sneak peak at the  VEX Robotics kit they will receive in the next few weeks, and learn more about this year challenge.

Science Foundation Ireland has provided funding for the regional heat to GMIT and Munster Technological University, which has been running the competition for 12 years now.

Since the creation of the competition, it has grown to encompass over 70 schools taking part each year.

Professor Graham Heaslip, Head of the GMIT School of Engineering, said “The VEX Robotics Competition challenges students to use a number of soft and hard STEM skills.”

“The competition will enable students to comprehend how important it is to come up with several solutions when solving a problem, enhancing their creativity and problem-solving skills.”