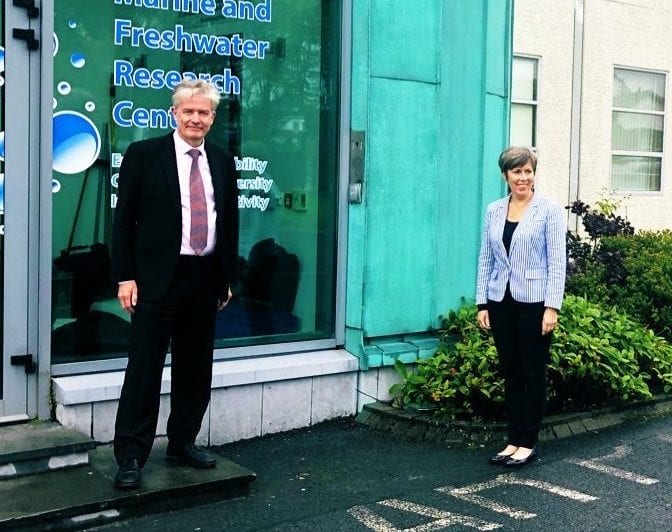 The President of GMIT, Dr Orla Flynn, this week welcomed the Australian Head of Mission to Ireland, Mr Robert Owen-Jones, to GMIT while he was touring the west.

Mr Owen-Jones, Charge d’Affaires at the Australian Embassy in Ireland, was on a two-day trip to Galway seeking to build cultural and business opportunities with organisations in the west.

He met with GMIT management including Australian native Dr Rick Officer, the IoT’s Vice President for Research and Innovation.

Dr Orla Flynn, President of GMIT, said “It was a great pleasure to meet Mr Owen-Jones and discuss the potential the west of Ireland offers, with our strong talent pool and quality of life.”

He later visited Galway Chamber where he met with local business leaders and companies with strong Australian ties including local employer Siteminder.

He also met a group of 50 native Australians who live in Galway and the west.

“The longstanding commitment and determination to see the development of culture in this region has been truly remarkable.”

“Not only in the promotion of new and upcoming artists, but in the protection of rural and more traditional Irish culture in a way that respects their unique history while maintaining the development of a modern and outward-looking city.”

The tour of the west of Ireland comes as Australia and the European Union are negotiating on a potential far reaching trade deal.