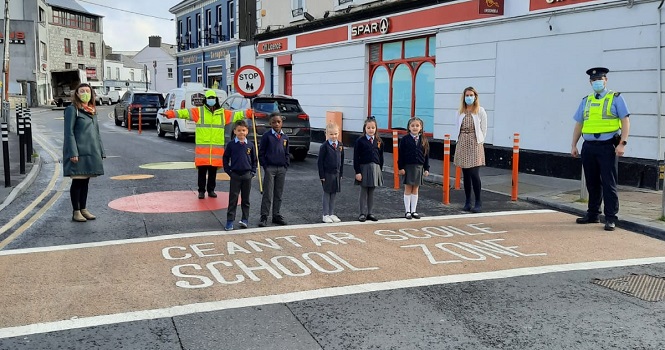 The reaction to the new pilot ‘School Zones’ in Galway City has been overwhelmingly positive, and the council plans to introduce these same safety measures at every school in the city over time.

The ‘School Zones’ pilot project has seen road markings in the form of brightly coloured spots introduced at 15 schools around the city.

The aim of the project is to make it clear to motorists that they are entering a school area, to slow down and to be extra aware of children.

The first of these School Zones measures are funded by the National Transport Authority through the Stimulus Fund 2020.

A tender is being prepared by the city council for full School Zones designs for all schools in the local authority area.

The 15 schools in Galway City chosen for the project first are:

These schools were chosen on the basis of the road at the front of the school being ‘taken in charge’ by Galway City Council, with pavement intact so the spots/ markings could be installed as a Stimulus measure.

This is one of two projects the council has been trialling in recent months in order to make the school run safer.

The other is the ‘School Streets’ programme, which involves pedestrianising the street near a school during certain times in the morning and afternoon to make it safer to drop off and pick up kids.