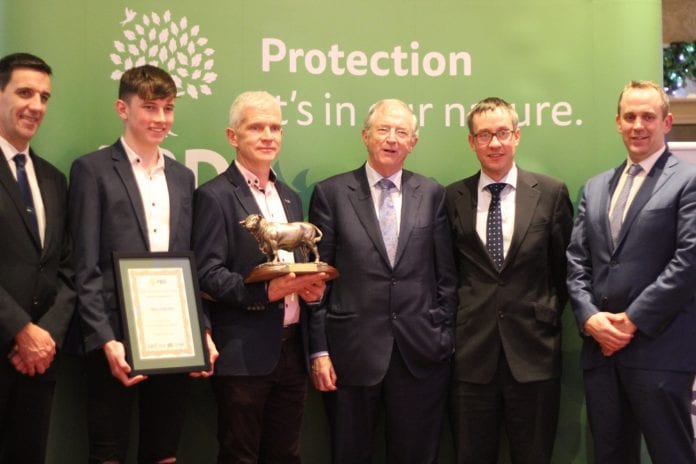 Killimor farmer Niall O’Meara has the best commercial cattle herd in Ireland according the to the Irish Cattle Breeding Federation.

The ICBF recently crowned Mr O’Meara the winner of the national commercial herd winner of the inaugural ‘FBD EuroStar €200 competition.

Niall O’Meare is a full time farmer, with 50 sucklers on his 70 acre farm just outside Killimor in east Galway.

For prime beef cattle, he concentrates on breeding, health, and grass, three keys areas for success.

In the past five years the farm has concentrated on achieving a calving rate of more than one a year, with a target weight of 500kg at 12 months.

Niall is a major believer in grassland management, and has made huge steps in recent years to improve on grazing management.

Those have included laying down new roadways and increasing the number of paddocks on the farm.

Up until last year the farm relied solely on artificial insemination, when Niall purchased a Simmental bull.

“I use maternal AI bulls and it gives me options. There is only one route for terminal-sired animals,” he said.

“I admit I may be taking 10-20cent/kg less for them but our sale weights make up for this.”

Mr O’Meara is also a strong proponent of Beef Data & Genomics Programme, which gives reliable genetic information on a cow’s breed and any diseases it may be carrying a gene for.

It also ensures that from birth there is full traceability of every meat sample directly back to the animal.

“I think BDGP has got a lot of bad press and I don’t think it deserves it. I can see myself making progress on this farm and what other country would pay you for making progress.”